Recently on YouTube, Dreamworks Animation released the official trailer for How to Train Your Dragon 2, coming to theaters in June of 2014. Absolutely nothing about the plot is revealed, but it’s easy to see that both Toothless the night fury and his rider Hiccup have grown up considerably — and learned a lot about aerial acrobatics.  The new film is both written and directed by Dean Deblois, half of the team that directed the first film. 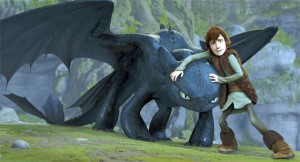