If He Only Had the Nerve

This month, with the second issue of the 5-issue mini-series Tales from Oz, Zenescope Entertainment focuses on the Oz fans’ favorite furry when Grimm Fairy Tales Presents Tales from Oz: Cowardly Lion hits the shelves. (Whew, long title!) According to the preview at Previews World: “No race in Oz is more fierce or proud than the Kavari. Their traditions go back hundreds of years and both Thane and Thorne have been born into tribal royalty as the son of the chief. Competition against each other since birth for the right to rule the tribe their rivalry reaches its climax when they both fall in love with the same woman…and must fight each other to the death to determine who will win her hand.” This full-color issue was written by Joe Brusha and illustrated by Miguel Mendonca. The furriest of several variant covers were created by Marat Mychaels and Harvey Tolibao. 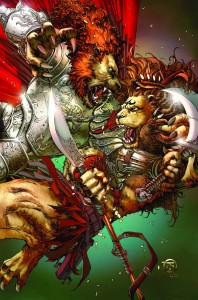