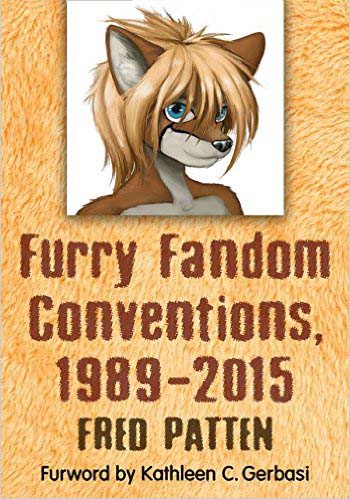 Of course there’s an awful lot of cons covered between Abando and ZonieCon (just about every one attracted far greater numbers of furs than those two). Fred has done a masterful job of gathering and organizing information about all of them. How many conventions? As that newsreel narrator intoned in Citizen Kane, “no man can say.” I couldn’t find a total number of conventions described therein, but the number is easily in the hundreds.

Fred’s evocative descriptions of long-ago conventions brought them back to life. To quote one, here is the description given for All Fur Fun 2007 and 2008 when it was held in Spokane’s Ridpath,

…a charmingly colorful hotel, about a hundred years old, with rococo statuary all around the lobby and a big, old-fashioned fireplace.

To quote another, Fred’s recap of the contentious ConFurence 8 describes how:

[Mark] Merlino got into an unruly shouting match when he announced…there was no reason for complaint because the [convention hotel] management announced there would be no problems next year.

Every convention gets at the very minimum a solid paragraph’s worth of information. Multi-yeared conventions get multiple paragraphs; Anthrocon’s section covers nine pages of Furry Fandom Conventions, while Eurofurence gets eight. The lists at the beginning of each convention’s entry enumerating its yearly theme, location and attendance are particularly informative in tracing not just the convention’s attendance, but the furry community’s overall rapid growth. For instance, Eurofurence began in 1993 with a mere nineteen furs gathered at the organizer’s parent’s vacation farm near Hamburg, Germany. Twenty years later Eurofurence 19 attracted 1,376 furs to a small town hotel; in 2014 that number grew to 2,015 (a 46% increase in a single year!) while the convention itself moved to Berlin, the country’s largest city.

A colorful and artful history

There’s plenty of art in Fred’s book, convention logos, mascots, posters and con book covers. An eight page color section includes some of the more impressive samples of convention-themed furry art. These include an ultra-manga poster for a Japanese furry meet and a creepy as hell, horror movie-style Feral the 13th “survival guide” cover for a camping-in-the-woods furry gathering.

All in all, an impressive feat of scholarship by Fred, one that will surely be consulted for years to come by furs as well as sociology and anthropology researchers and students. I take issue though with the book’s back cover estimate of 50,000 furries in the fandom. In my humble opinion 50,000 furs is an extremely conservative estimate. According to Dragoneer, Fur Affinity’s Director, that repository of furry creativity alone has over one million registered users. Now that might be a highball number, but whether it’s 50,000 or 50 million furs, we are definitely huge in number and all over the freakin’ planet, from Anaheim to Australia. Thanks to this work by Fred I feel it has been made crystal clear to everyone inside and outside the furry community that our gathering are far from a trivial fad of a few marginal members.

If interested, please consider buying a copy of your own.

I am thrilled to see a recent and ongoing surge in non-fiction furry books! This one makes for an intriguing and informative addition to a small but growing library, alongside "Furries Among Us," "Fur Science," "Critter Costuming" and a small number of instructional art books, as well as upcoming books like your "Furry Nation" and Grubbs Grizzly's "Furry Book," and I believe I heard that Thurston Howl has a "Furries Among Us 2" in the works.

50,000 does seem like a rather modest number, and one that implies that 2015's two most popular conventions were each attended by 11-12% of the entire fandom. That's high compared to anime fans' estimates yielding about 0.1% in their own fandom. (I get that number by seeing anime discussions ball-parking their own numbers at 8 digits - see https://myanimelist.net/forum/?topicid=1203565, and con attendance at 5 digits - http://animecons.com/articles/article.shtml/1484/Ten_Largest_North_American_Anim...)

At the same time, though, the "one million registered users" on FA might include a significant percentage of accounts of users who are deceased, or are not furries, or belong to users with multiple accounts, or are actually "groups" (as FA has no way to distinguish a "group" from a normal user's account. (Maybe Dragoneer specified otherwise, but I don't know where he states that figure.)

As a point of comparison, Inkbunny has 67,000 monthly active users. Judging by FA's "users online" statistics (based on a rolling 15-minute interval), Inkbunny's hourly user stats, submission rates, and external traffic measurements, I reckon it has ~1/6th of Fur Affinity's traffic. That might mean about 400,000 people care enough to visit at least one furry website, which I think is closer to the mark. Maybe 500,000 if you consider all the people who gave up on FA over the years. :-p

Of course, fandom membership is a sliding scale. You don't get a furry membership card upon entry (though I have one from IndyFurCon…). New people join daily; others drift away. But clearly, furry continues to grow, in old and new markets.

I met (see: talked to) quite a few people who loved what is essentially "furry stuff", but refused to call themselves furries.

I will make an educated guess and say there IS about a million fans of... ahem..... humanized animal characters... on this planet right now.

Dogpatch Press has a post on the books ABOUT furry fandom that have been announced for 2017.

and another on the books already published, mostly how-to-draw-furries art books and costume-making books.

This book was over three years in the making. I'm glad to see it published at last.

Talk about time marching on: I came across an online group for greymuzzles, which was for furs...over 30! As someone who's a bit more than 30+ maybe I should start a group for prehistoric muzzles

Yarst! I'm a 76-year-old greymuzzle. Don't remind me of how old we're getting.

I was born in 1940, and I remember the public countdown during the '40s & '50s over the last Civil War veterans, over "who will be the last to die -- a Union or a Confederate veteran?" I think the last of them reached their 110s. S-f fandom's First Fandom fans are almost all dead today; Dave Kyle just died in his late 90s. I expect to be the first furry fan to die of old age.

The book is intended for college and university libraries more than for individual furry fans to buy. If any fans are attending colleges or even high schools, they should see if their school libraries have this. If they don't, request that they get it.

I think most (if not all) students would not be caught dead checking out that book. Way too embarrassing an artifact for a cool kid with good reputation to possess.

This is a MUST get for anyone interested in the history of the fandom. In fact if I can I am going to order the book today.

To answer skippyfox question Furries Among Us 2 is in the works. I was suppose to have an essay included that book, which I did submit to Thurston. But after a falling out I had with it's publisher, I have no idea if it is going to be included.

I'm the real-life 'kid in a candy store' - the one my parents ran in Brooklyn until I was 13. I was marinated in the pop culture stew of comic books, Warner Bros & Fleischer cartoons on TV and kids' matinee films I saw every weekend. I've always had a love of animation and of characters like Bugs and Pepe LePew, and often wished I could join them in their world - a sign of incipient furriness right there.

I worked for years in TV promotion at Bravo and then Sci-Fi Channel before going freelance. Since then I've written about animation and sci-fi/fantasy films for mainstream publications and scripted an episode of the Nick Jr. TV series Wow Wow Wubbzy!

I blog under the name "The Miscweant" on the animation industry website awn.com. I've written the kids'/furry novel "The Incredible Hare" and host occasional audience-attended conversations with animation professionals at various NYC locations under the umbrella title "Interview with an Animator"

I didn't discover furry so much as furry discovered me via a flyer I received in 1988 out of the blue for a 'furry party' at the Philcon sci-fi convention. No one had to explain it to me - I knew exactly what I was looking at and that I belonged there. I contributed to the furry 'zine Rowrbrazzle for years & now post on Fur Affinity as "Comus". I also fursuit as the dapper but sinister Komodo dragon "Komos."

So yeah, I've been part of the fandom since its earliest days - but don't call me a 'greymuzzle' or I'll punch you in *your* snout.