Cat Fight — On A Planetary Scale!

Battlecats is a new fantasy-adventure comic book series written by Mark London and illustrated in vibrant full color by Andy King and Julian Gonzalez. According to the publisher, Mad Cave, “In a land where chaos is embraced and war is the ultimate desire, order must be enforced. Enter the Battlecats. The most seasoned warriors in the land, fearless, determined, devout, this elite group travels the realm of Valderia fulfilling the King’s mandates and displaying heroism worthy of the God they worship. The Battlecats are about to embark on their most perilous quest, all while unraveling the origins of a holy war.” Shades of He-Man and, yes, Thundercats — in a good way. There’s a trailer up on YouTube. As you can see there, Mad Cave not only have several issues of the comic out but also t-shirts, posters, and even a soundtrack CD are available now. 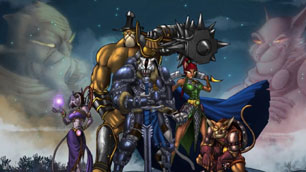