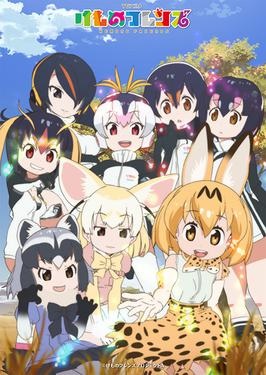 “Kemono Friends” (けものフレンズ) began in Japan in 2015 as a mobile game. A manga was serialized in “Monthly Shōnen Ace” (one of Japan’s “telephone book”-sized comics magazines) from May 2015 to March 2017, and a 12-episode anime TV series was broadcast from January 10 to March 28, 2017 on Wednesdays. Sequels are currently in production.

The plot is that Japari Park is a huge island zoo of real, extinct, and mythological animals. A mysterious substance, Sandstar, turns all the young female animals into “Friends”, Japanese cute girls about 10 to 12 years old with furry ears and tails. Kaban is a girl who wakes up in Japari Park with no memory of who she is or how she got there. Her first friend is Serval, a girl with serval ears & tail, who names her Kaban (bag) because of her backpack. Other characters they meet include Raccoon, Fennec, Alpaca, Crested Ibis, Jaguar, Beaver, Prairie Dog, Moose, Gray Wolf, and others. Lucky Beast, a mysterious robot rabbit, seems to be in charge. Kaban is helped by Serval and Fennec through the Park to learn who she really is.

Everyone expects “Kemono Friends” (in English, “Animal Friends”) to come to American TV and DVD soon. But for now, if you like Japanese animal girls (ears and tails only) of more species than just cats, dogs, and bunnies, then you can watch “Kemono Friends” on Steam's gaming service, or Crunchy Roll.

The detail was cut from my submission that this TV cartoon for young girls was broadcast in Japan from January 11th to March 29th, 2017, at 1:35 a.m. (!). How late do young girls stay up in Japan?

Well, that's okay, I'm guessing "seriously" was not the tone they were going for.

I am just sick and tired of the "little anime girl" thing. I wish it would go away.

It’s been around since “Sally the Witch” in 1966. I wrote a column for Cartoon Research in October 2013 on the “Magical Little Girls”.

There are dozens of ‘em from practically every Japanese animation studio. They’re here to stay.

I checked out the first episode, decided to watch the rest. Got up to I think episode 5 or 6 before I had to leave work.

It is interesting and cutesy, and I'm intrigued by the implied Post-Apocalyptic backstory.

I finished streaming the series on Crunchyroll some time ago. Yes it starts like a overtly kawaii anime for the younger set , yet the show held my interest not just the cute furriness but also post apocalyptic underlying mystery about Japari Park, the friends and Kaban herself.

I fully expect this show to be a huge hit when it comes to the U.S.