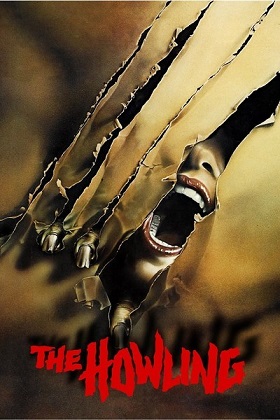 As a kid, I was given many cheap Wal-Mart editions of the writings of children's author Thornton Burgess, including The Adventures of Old Man Coyote, which contained a back cover blurb that was given a header simply saying "The Howling".

I bring this up because the movie referenced not very appropriately by that children's novel back cover is, on one hand, overshadowed by a similar werewolf movie that came out the exact same year, but has still managed to find itself embedded into pop culture deep enough that it gets its own call outs. I'll be covering that more popular werewolf movie eventually, but of the two werewolf movies of 1981 (three if you count the sorta-werewolf movie Wolfen), The Howling is my favorite.

Of all the werewolf movies I plan on covering, it has the most obvious flaws. It, more than any other, is going to take a very forgiving attitude to dated special effects. At least The Wolf Man has its iconic status going for it. The Howling also features one really cheap jump scare early on, but, to be fair, it makes up for this with one of the most earned jump scares in horror movie history later on. And finally, one of the main reasons I really love it so much is also something people can find annoying.

Postmodernism is a philosophical movement that is very complex and hard to define, and this is a review of an 80s horror comedy, so we're not even going to try and understand that and instead oversimplify it to the point of absurdity by saying that if you're watching a movie and the movie assumes this isn't the first movie you've ever seen, it's a postmodern movie. The go to example of a postmodern horror movie is the slasher Scream, in which both the possible killers and the possible victims watch, critique and are inspired by former horror movies. The idea here is that it is impossible to be entirely original in this late day, so it is better to acknowledge inspiration and try to be the best possible version of something rather than something new and possibly flawed, or worse, less original than the creator thought.

Scream was hardly the first postmodern horror movie; The Howling contains a scene where a couple is informed their friend has been bitten by a wolf while they are watching The Wolf Man on TV. To be fair to Scream, The Howling is one of the few non-slasher horror movies explicitly referenced by Scream, so that it once again acknowledges its inspirations.

The Howling features werewolves that are confident that they are nearly invincible, because they have such a limited range of vulnerabilities. The human characters counter this with the fact, thanks to werewolf movies, everybody knows what those vulnerabilities are.

Well, what are those vulnerabilities, and how does The Howling follow the rules as set out in The Wolf Man? A quick rundown:

What's the SCARIEST THING in this movie?

This is the main difference between The Howling and The Wolf Man; while The Wolf Man is concerned primarily with the nature of man, The Howling is more concerned with the nature of fiction. While The Wolf Man was tragic, The Howling is comic. Though the movie does eventually feature innocent characters who are forced to deal with the "curse" of the werewolf, the main werewolf, Eddie Quist, is introduced as a serial killer; he's evil to begin with, and the whole werewolf thing is just a nice bonus. If anything, the curse from his perspective is not that he occasionally becomes a bloodthirsty monster; it's that he occasionally has to not be one.

Now, here comes the tricky part, because the movie has a couple of twists, and even though this movie is half a decade older than me, I wouldn't want to spoil anything. One twist involves who, besides Eddie and his sister Marsha, is a werewolf. That twist I won't spoil. But, I just revealed Eddie and Marsha are werewolves, and related. However, Marsha is the most blatantly revealed werewolf, you'd have to be unaware you're watching a werewolf movie to not know Eddie was a werewolf from the beginning, and then there's how the revelation that Eddie and Marsha are brother and sister is played by the movie.

If you've been paying attention at all, and have the slightest familiarity with genre conventions and plot structures, you've already figured out the connection. And the movie knows this; it plays the scene where a character finally puts it all together like it's genuinely a revelation, and that this revelation is what the scene is about. It isn't.

Postmodern films can annoy people because they may not take the action of the movie seriously; this scene, which I just simply refer to as "the folder scene", is a great counter to that idea. The movie knows you know; you think you know that it knows that you know. But then you don't. And that's how it gets you.

There's gotta be a sequel

The Howling spawned almost as many sequels as your average 80s slasher, the best thing that can be said of of them is that a few of them, such as third, The Marsupials (yes, really), is that they fall into "fun to watch if you like watching bad movies" territory. Most don't even make it that far. 2011 saw a soft reboot with The Howling: Reborn, which is fairly a decent example of what it is; hardly a "required viewing" for 'Werewolf Movie 101', but listed on the syllabus under "Extra Bonus Viewing".

The movie is a weird case where, though the movie is itself well known even outside of genre aficionados, it's usually not the what the bigger players are known for, even among genre aficionados. Director Joe Dante is better known for the Gremlins movies. Baddy Eddie Quist is played by Robert Picardo, better known as the holographic Doctor from various Star Trek series.

The star is famed scream queen, and one of my favorite actresses, Dee Wallace, who is best known for playing the mom from E.T. In fact, that's how Scream describes The Howling; the werewolf movie with the mom from E.T. The truth is that she got Steven Spielberg's attention when he saw her in The Howling. She's known for her wholesome onscreen persona, despite mostly appearing in horror movies. More recently, she played an evil witch who beats a man to death with a frying pan in Rob Zombie's The Lords of Salem. How's that for postmodern playing on expectations?

Despite it's differences, The Howling does end much the same way as The Wolf Man, with characters offering incorrect explanations for something that happened right in front of them. This time, a character transforms into a werewolf on live TV in order to prove werewolves are real. Viewers are impressed with the special effects, anyway. "What are you watching?" one character asks in an exasperated tone of voice, which may be the greatest line in cinematic history. As Roger Ebert might have pointed out, the movie just reviewed itself.

Speaking of ol' Unca Roger, what did my favorite movie critic have to say about The Howling? Well, he didn't exactly give it the respect I do, with a two out of four star rating. On the other hand, the Roger Ebert review of The Howling is the single greatest piece of cinematic criticism ever written. I will fight you.

All right -- you asked for it -- WORST thing -- you've ever seen -- MOST DISGUSTING SIGHT in the history of films -- you don't believe what you're seeing -- here it comes, Little Jimmy: Before your VERY EYES -- this movie CHANGES INTO A DOG!

I read this and am sad, because I know I will never write anything half as beautiful.

I don't blame you. This is a great movie. The special effects, the writing, the acting, it's all great.