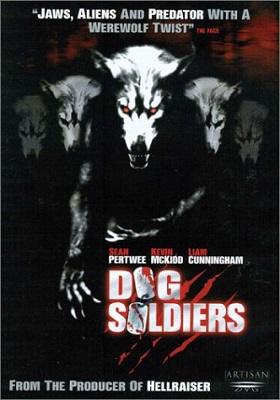 First of all, happy Halloween!

But, sometimes, hidden in the terrible filler, something emerges from the shadows. Perhaps I waste my time watching bad Sci Fi movies, but they provided a baseline. It's harder to know when you've got a good werewolf movie if you've never seen a bad or even just indifferent werewolf movie. Of course, if you don't have the patience to sit through the bad (with or without the MST3K patter), you can just take my word for it.

Dog Soldiers is a gory blast.

The Rules of Engagement

Dog Soldiers begins with two vignettes that setup future events of the movie economically. One involves a soldier in a test to become an elite soldier. He's avoided capture for quite a while, but eventually he's sniffed out by a canine tracker. His commanding officer asks him why he didn't just shoot the dog. This situation devolves until Private Cooper (Kevin McKidd) is kicked back to the regular army. When the werewolves finally show up, a pet dog is trapped with the humans. Thanks to this scene, whether the dog makes it or not is about more than just horror movie cliches.

The other short little vignette is a pair of campers. They don't appear past this scene, at least not most of them. They do happen to have a silver knife with them. The scene explains this while getting us to sympathize with the characters before bloodily killing them off. It sets up where later possible victims of the werewolves could find silver, because these werewolves follow these rules:

The werewolves find the elites first, and the only survivor is the same officer that drummed Cooper out of his unit for refusing to kill a dog (Liam Cunningham). Eventually, the werewolves run into the rest of the soldiers, led by Sergeant Wells (Sean Pertwee), who is nearly eviscerated in the initial attack (his one word reaction to his own intestines, "Sausages", might be the most quoted line in a very quotable movie). Only the timely arrival of a local biologist (Emma Cleasby), who delivers them to a lonely farmhouse, allows them to escape.

Of course, the family who owns the house is out, but they can't have been gone long. They even left some kind of stew cooking on the stove. Surely they'll be back soon. To finish the meal.

"Come and have a go if you think you're hard enough!"

The thing that separates Dog Soldiers from other werewolf movies is that, in this case, the werewolves might have met their match. They're up against real soldiers who, once they get over the initial confusion, get their act together and fight back. One of the soldiers gets into what is basically a fistfight with one of the werewolves, and he wins. Well, okay, not really, but the werewolf has that invulnerable to anything but fire or silver thing going for him. Oh, and it calls for backup. In other words, the werewolf cheated. When it gets called a wimp, you believe it.

The great thing about this movie is the characters. Yes, they will all mostly be torn apart by werewolves by the end, but the movie makes you care about them. I already pointed out that the movie makes sure you care that Sam the dog makes it out alive, but the movie is very good at getting you to root for the soldiers. Pertwee especially is great as the Sergeant who takes losing his men personally, and who is also slowly realizing that, for all intents and purposes, he's already a casualty.

The movie is brutal and gory, and so is the dialogue. It's endlessly quotable, though ninety percent of the really good quotes are full to the brim with four letter words, so you'll just have to take my word for it.

Neil Marshall, the director and writer behind the movie, later filmed The Descent, which actually managed a US release, instead of going straight to Sci Fi. Despite Dog Soldiers cult movie status and The Descent getting a lot of positive press (the movie was marred by multiple endings depending on which side of the Atlantic it was shown, none of which were very good), he's mostly directed episodes of television shows since, though he's attached to the Hellboy reboot.

A sequel, subtitled Fresh Meat, was announced, but never happened. At one point, it was rumored that all it needed was some additional footage of the full moon, but apparently that was impossible to come by, as the sequel has never emerged from whatever developmental hell it found itself in.

Come and have a go, if you think you're hard enough!

I find the werewolf costumes to be just tremendous. Obfuscated by shadow and action throughout much of the movie, there are some lovely stills to ogle in the end credits (IIRC?) and on the disk extras. The creature design imagines werewolves as very authentically wolf-like bipedal forms - far more interesting than the common humans with glowy eyes / long fingernails / sideburns trope (I love you anyway Teen Wolf).

This is one of the more underrated ones. It basically takes the classic "Night Of The Living Dead" / "Resident Evil" setup of having a bunch of people trapped in a creepy old house and just replaces the zombies with werewolves. The part where the guy gets his stomach slashed open and his intestines spill out was like something Tom Savini would've come up with. Using practical effects for scenes like that as well as the werewolves combined with the setting made it feel like a throwback to the better 80's/90's horror movies.