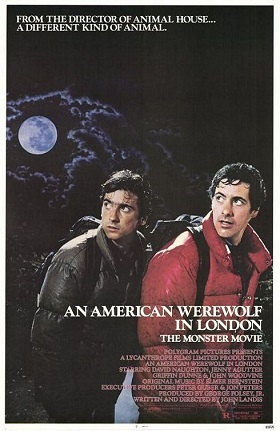 Occasionally, there comes a pair of movies that share remarkably similar themes that come out together. Sometimes, as in Antz versus A Bug's Life, there's evidence that one of the movies was designed as a direct competitor to the other. More often than not, however, there's just something in the water. Just last year, Disney went out of its way to advertise how unique a movie Zootopia was for featuring a fully anthropomorphic animal world in the one year in the history of American feature animation where that was not a unique quality. These things just happen.

1981 was one of those years, featuring not one, but two werewolf movies utilizing cutting edge (for the time) makeup effects that also happened to be horror comedies as opposed to straight horror movies. The Howling came out first, but it was the scrappy underdog that went up against the real Hollywood juggernaut, An American Werewolf in London, written and directed by John Landis, an up and coming director who hung out with the likes of Steven Spielberg.

Though An American Werewolf in London is an acknowledged classic of the horror genre and features a ghoulish sense of humor (Landis was, and still is, best known for Animal House, early poster taglines noted this movie featured "a different kind of animal"), it is, like The Wolf Man, very much a tragedy. And not all the tragedy is on screen.

One point of difference between The Howling and An American Werewolf in London is which of the "werewolf rules" each follows or disregards. They actually perfectly counterpoint each other. One contains a scene where moon-based transformations are called pure Hollywood, but silver bullets are necessary, while the other contains a scene where the idea of silver bullets are met with sarcastic quips, but the moon thing is taken deadly serious.

To recap, in An American Werewolf in London, the rules as set down in The Wolf Man are followed thusly:

Though the movie is a hybrid of horror and comedy, the postmodern aspect is not used for the comedy. The comedy in this movie mostly comes from playing off the banal with the supernatural. There is an extended comedy bit that boils down to the observation that, if you run around howling at the moon all night, when you wake up the next morning completely naked in a strange location with no memory of it, your trip back home is going to be difficult to say the least. The postmodern aspect of this movie is actually played for tragedy. The newly cursed werewolf David knows full well what lies in store for him, because he's seen it happen to Larry Talbot in The Wolf Man.

Horror apologists like to say that horror lets us explore our deepest, darkest fears, of any shape or texture, and that it always has. This is, of course, a lie. Horror cinema can trace a direct lineage back to the the Gothic romance, and these early novels were about a very specific fear. The fall of the Roman Empire. See, about the time the first Gothic novels were being published, the people writing them had the feeling that humanity (at least in the West, anyway) was getting a handle on this whole "civilization" thing, but there was an uneasy remembrance of the last time the West felt this way. These novels were about noble houses falling into decadence and dissolution. The fall of the Roman Empire in miniature. They were about our past coming back to haunt us, frequently, literally.

An American Werewolf in London is one of the few werewolf movies to mention the fact that a star is used to mark victims of the werewolf curse. If you think about it, the use of a star to mark victims is an odd motif for a werewolf. Shouldn't it be the moon if we're going for celestial bodies? But The Wolf Man was written by a man who had personal experience with victims marked with a star, if not exactly five pointed. Curt Siodmak, the man who created the rules for the werewolf, was a German Jew who fled his homeland at the rise of Adolf Hitler.

The werewolf of modern cinema is an arguably Jewish monster (it should be noted that the only person who helps or even truly believes Larry Talbot in The Wolf Man is a gypsy, a member of another group persecuted by the Nazis). David, the protagonist of An American Werewolf in London, is explicitly Jewish. At one point, while recovering from the original werewolf attack, one of his nurses even notes that he's circumcised. She extrapolates from this that he's Jewish, despite the fact that circumcision is a common practice in Americans of many ethnic and religious backgrounds. Nowadays, American medical circumcision is questioned with frequency, and many of the questions are valid. But there's always that one questioner who brings up its beginnings in Jewish religious tradition.

If you think the Nazi/Jew/werewolf connection is a bit thin, Landis, another Jewish screenwriter, makes the connection explicit in An American Werewolf in London. David, while unconscious during recovery from the original attack (and presumably being checked out head to toe by curious London nurses), has multiple nightmares featuring werewolves in SS uniforms slaughtering his family and friends. Despite being dreams, they are some of the more genuinely disturbing sequences in the movie, which is still the scariest werewolf movie made.

You wanna see something really scary?

So, An American Werewolf in London went on to be a box office hit and even won an Oscar for makeup artist Rick Baker in the brand new Best Makeup category. His success with this movie led him to be invited to be one of the segment directors for the anthology Twilight Zone: The Movie, along with his friend Steven Spielberg, Mad Max creator George Miller and The Howling director Joe Dante. Fate once again stepping in to forever pair The Howling and An American Werewolf in London would possibly be the most interesting thing to come from this not particularly well-remembered anthology, if it wasn't for an accident that occurred while Landis filmed his segment.

A helicopter crashed during filming of what was supposed to be the climax of his segment, killing three actors, including two child actors. Landis was in breach of child labor laws, not having the correct permits, and it was clear after the fact that multiple deceptions were used to hide how dangerous the shoot was and the fact that the child actors were even there. Landis, as well as a few high ranking members of his crew, were charged with manslaughter, though acquitted. Spielberg ended his friendship with Landis then and there, and Landis' career never really recovered. Though Landis was responsible for the crew and conditions on this movie, his actions were hardly unusual for filmmakers at the time. The helicopter just happened to crash on his actors.

Landis' son, Max, has gone on to become a screenwriter himself, and a new An American Werewolf in London, with Max as the writer and director, has been announced. However, John Landis has been vocally against the idea.

I think the star has been kind of removed from the werewolf mythos. I can't remember the last thing I saw it in, after this movie.

Perhaps the werewolf has been succeeded by the clown? After all, when I was growing up, clowns were supposed to be funny, the comic relief at the circus or the rodeo, or perhaps a sidekick on a kid's show. It's only been during my adult life that this idea of clowns being scary or creepy has really taken hold.

Edit: Apparently it was Stephen King's 1986 novel It and the subsequent film versions that really catapulted the 'evil clown' trope into popular culture.

Very interesting perspective about the werewolf being a Jewish monster. Certainly adds a layer of meaning to the film.

I do see why people prefer this to The Howling. A large portion of the entertainment value derived from a werewolf movie boils down to special effects. We want to see a great creature, even if it's only briefly. The final result of the transformation can make or break your film. Still, I actually think I prefer the former in this case. The Howling is scarier in my opinion and had more interesting characters. It had a sort of film noir atmosphere I loved. With this film, you can tell that it was written by someone with a lack of experience (I believe Landis originally started writing it when he was 17 and finished at 19) as the main character didn't have much development and the ending was very hit or miss. You could argue that we don't know much about David to leave it ambiguous as to how much of his personality his him vs. the influence of the werewolf, but you still could've given him more personality than a Pepper: https://www.youtube.com/watch?v=gQPN3UKQM-U

Honestly I think he just wanted to say "Jewish monster".

An American Werewolf in London is really a nice film as I have watched it with my friends once and liked it.