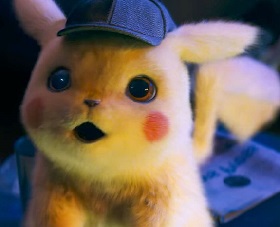 Rotten Tomatoes has put together a list of every video game adaptation to accumulate 20 professional reviews. It isn't pretty. Besides being the sole "fresh" video game adaptation, Detective Pikachu is only the third to achieve a score of over 50%, with two of last year's movies, Rampage and Tomb Raider, both reaching scores of 52%, the latter with a handful more reviews. Before 2018, 1995's Mortal Kombat held the record as the "best" video game adaptation for nearly a quarter of a century at 46%.

Detective Pikachu also has the distinction of being the best-reviewed Pokémon movie. Conveniently, Rotten Tomatoes counts the franchise's previous movies as adaptations of the Pokémon games, so they're on the list. Before Detective Pikachu, 2001's generically-subtitled Pokémon 3: The Movie was the critical "favorite" at 21%. (Recent efforts The Power of Us [2018, 60%] and I Choose You! [2017, 43%] didn't make the 20-review cut; few movies in the franchise saw wide release in America.)

The 3DS game Detective Pikachu is adapted from is also well-reviewed. It has a combined score of 71% percent on video game review site Metacritic, giving it a "mixed" level of reception. Metacritic also collects movie ratings as a rival to Rotten Tomatoes, and gives the movie a Metascore of 53%, again qualifying as "mixed". Metacritic draws reviews from a much more selective pool of critics; it also takes ratings into account when assigning scores, rather than tracking them separately like Rotten Tomatoes.

Flayrah's review gave the movie a thumbs-up; alas, it won't count for the Tomato-meter, but it's one of the few posted by a Growlithe.

This article has at least one glaring problem, namely that Pokémon Detective Pikachu did not in fact get a "Certified Fresh" rating. The site's help page provides an explanation of the Tomatometer, which lists among the criteria that a film must have a "steady Tomatometer score of 75% or higher" to be "Certified Fresh"(*). A rating below 60% would give it "Rotten" status; if it's at least 60% but fails to meet the "Certified Fresh" criteria, it gets the neutral red tomato rating, which is where Pokémon Detective Pikachu currently stands.

(*) I found examples of "Certified Fresh" films as low as 71%, so apparently the 75% threshold isn't hard and fast (perhaps they were granted the rating and subsequently received more negative reviews that dropped them by a few percentage points).

It never claimed the film was "Certified Fresh", just "Fresh". Per the linked page, the tomato is not the default (which is no rating at all), but rather an indication of "Fresh" status:

A Tomatometer score is calculated for a movie or TV show after it receives at least five reviews.

When at least 60% of reviews for a movie or TV show are positive, a red tomato is displayed to indicate its Fresh status.

Indeed, this means that The Power of Us is also technically "Fresh", as noted on Wikipedia. As the revisions show, this was caught in editing; we had to limit the claim to "well-reviewed" video game adaptations.

The Certified Fresh thing means you have to be over 75% when you hit a certain amount of reviews (I think it's 80 for wide release and 40 for limited release); more reviews can come in and lower the rating, and this also means movies with well over 75% can still not be considered "Certified Fresh" (for instance, the The Many Adventures of Winnie the Pooh is 100%, but only has 13 reviews), and I guess it's even technically possible to be both "Certified Fresh" and "Rotten" at the same time, though not very likely.

I ran into some snags with Rotten Tomatoes own list, since they originally ran it in 2018 with movies under 20 reviews (the highest rated movie then was a direct-to-video Resident Evil animated movie that got a three night showing at one American theater and had a rating of 50% from 6 reviews), and I was mostly going off of memory from that. Green Reaper pointed out that technically The Power of Us is also Fresh, but it has only five reviews and also we can go way into the weeds arguing over whether the other Pokemon movies are adaptations of video games or of the Pokemon anime and then get into an argument whether it even counts as a fully theatrical release or not (Jerry Beck doesn't even list it in the addendum for pseudo-theatrical animated releases on Cartoon Research's Animated Movie Guide) and if it doesn't, should direct-to-video movies count or not, and am I being to America-centric making that argument (because it probably actually did get a full release in Japan). So, the words "well-reviewed" were added to the lede to cover it (and I can't remember if "widely-released" was in the original headline or not, but if so, we're still technically correct).

But, anyway, yeah, I think video game adaptations have a long way to go before they get that "Certified Fresh" certificate.

Of course, differences between the two that would allow you to trace its lineage, and nowadays I guess it's seen as a "property".

Okay, but the real puzzler is what does that make Pokemon Yellow?

Yellow and it's successors are based on pure breed greed!

More Rotten Tomatoes weirdness since I brought it up, but Joker gained a lot of positive reviews off its Venice Film Festival premiere, getting it past the 80 needed reviews to gain a "Certified Fresh" seal of approval; however, as more reviews came in nearer to its actual theatrical release, it is now down to a spectacularly low (for "Certified Fresh") 69%. It probably won't go much lower, but that's about as close as you get to the proverbial "Certified Fresh" Rotten movie.

I guess people realized giving rave reviews to a pro-terrorist movie was a bad look? Either that or they went along with the crowd.

Okay, so apparently Joker has had it's Certified Fresh certification revoked.

I didn't know that could happen.

Fortunately this story has the perfect picture for you! Given it's topped $800 million in revenues, I don't think they'll be too disappointed.

It barely qualifies as a video game movie either. I think that's telling. What exactly telling of, I guess I'm not sure of right now. But it seems like the closer a video game "adaptation" stays to its source material, the harder it is to get even close to a consensus unless the consensus is that the movie is either a bad adaptation or just a bad movie in general.

Off-topic but I really should make it a point to watch the Mortal Kombat movie again. I remember it being a pretty fun movie with a really interesting take on the source material and characters when I was 12. Everyone seems to think it's aged pretty badly though.

Anyway, I could give a fuck less about this movie or Pokemon as a franchise but it's nice there's been at least a few movies in close succession that it seems people have really enjoyed all around. Maybe the video game industry itself will take note and learn you have have rave reviews and make record profits without downright lying, scamming, and turning a dismissive, cynical eye/tone to your consumer base.

"It barely qualifies as a video game movie either."

Care to explain that statement? Not only is it very clearly tied to the world of the Pokemon video games but it seems like the plot is about as close to the game as it can be, after accounting for everything that needs to be cut out and adapted.

Man I was gonna try to explain it serious but I see you here talking about you think Tomb Raider is good because it has huskies. Well lots of people like Angelina Jolie in short-shorts. They went to see it for that. And they liked it. And they still knew the movie was bad, didn't pretend otherwise and reviewed/rated it accordingly. lol.

I'm not entirely sure taking an average from critics is really useful. They don't judge it on a set of technical merits (although sometimes that plays a part) but its an impression. I think the best way to read a review is to find someone whose taste is similar to your own. I don't really care if some feel-good sports film has a good critics' rating because it's not likely to interest me. And there are many times when the critics' score and the audience score are miles apart. I think that's because the critics are not the audience so they are not suitable judges for someone who is a fan. Looking at the aggregate critics' score isn't really going to tell you if you'll enjoy a film or not. If enjoyment is the point of watching a film then it might not even tell you the film is good or not.

On a side note, Pokemon 3 was the best reviewed? Seriously? I watched that years ago and all I can remember is that I thought it was the most boring thing I had ever seen. It's been a while since I watched it but I remember Pokemon 2000 being so much better than Pokemon 3.

Even more evidence those critics are confused? Lara Croft Tomb Raider got 20%! Is there even a single bad scene there? It's got cool action, great humour and is completely over the top. My sister and I still quote lines from that film! I'm pretty much incapable of unscrewing anything without adding "It's my map, so I know where they all came from." It even has huskies. The sequel was pretty bad though.

Its doing OK because of the fact that they didn't try and make Pikachu look like "something else".
They also adhered to logotypes and other things that didn't make the average moviegoer think that they were watching something different..

Overall this offended a great number less Pokémon fans compared like-for-like with the upcoming Sonic movie. Unfortunately they went completely batshit crazy with the latter, which is unfortunate, and very sad.

I'm going to point out that the art director for the newer God of War games has apparently been doing "realistic" Super Smash Bros. fan art, and his Sonic, which he put out before the trailer, actually ended up very close to the original movie design. (Though, it should be pointed out, leaning into the uncanny a bit is kind of the point of this sort of fan art.)

I don't think there's a lot you can do with Sonic, design-wise.

We all know the design of Sonic and indeed all the other characters are constrained.
I suspect it was that way by design

Since I brought up review bombing, it's now a little bit harder to pull it off on Rotten Tomatoes.