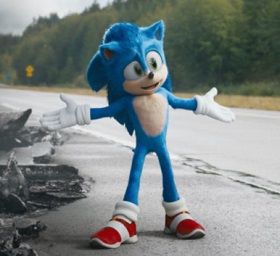 While Sonic the Hedgehog was too slow to be the first (that would be Pokémon: Detective Pikachu) "fresh" video game adaptation, or even the second (not counting 2018's Pokémon the Movie: The Power of Us which technically has a "fresh" score, but has collected so few reviews even Rotten Tomatoes doesn't count it on its own list).

"Fresh" video game adaptations are still the exception, rather than the rule. Sonic the Hedgehog is also the lowest rated of the three wide release movies, with the second movie, The Angry Birds Movie 2, having the highest score, with 73%, though it also has the lowest number of reviews, with only 106. Note that all three of the video game adaptations with "fresh" scores feature anthropomorphic animal characters.

According to Rotten Tomatoes, a movie is assigned a score and rating when it garners five professional reviews. In order to be "fresh", at least 60% of those reviews must be generally positive. A movie can become "Certified Fresh" if it garners 75% from at least 80 reviews (including 5 from "top critics"), but no video game adaptation has reached this threshold, though the Angry Birds sequel came surprisingly close.

Rotten Tomatoes also assigns a "consensus" to a movie, noting areas that critics consistently praise or criticize. Sonic the Hedgehog's critical consensus is:

Fittingly fleet and frequently fun, Sonic the Hedgehog is a video game-inspired adventure the whole family can enjoy -- and a fine excuse for Jim Carrey to tap into the manic energy that launched his career.

So, there you have it, folks. The three video game movies closest to real cinema are an Angry Birds sequel and Sonichu.

Hey, it's not a direct adaptation, really.

Everyone and their (grand)mother forgets Prince of Persia, which was a solid film. I wonder why everyone went so far to forget a movie when it was pretty *********** brilliant, for adapting a game with a minimalistic story.

The internet doesn't forget, it's just a bit critical.

Your opinion falls under this XKCD comic about positive unpopular opinions: https://www.explainxkcd.com/wiki/index.php/2184:_Unpopular_Opinions

Well, who could have predicted that Sonic the Hedgehog would end up with a higher Rotten Tomatoes score than Wonder Woman 1984? WW84 also has the rather dubious distinction of being the second DC comics movie to lose it's "Certified Fresh" status, becoming just "fresh", after Joker last year. And at just 62%, "rotten" is not out of the question.

Armond White all out here like "I'mma ruin this movie's whole career!" and now he's like, "Oh, shit, my opinion is normal."

The sequel has also managed to gain a positive rating of 68% (could and will probably change, but not a lot), so this is officially the best reviewed video game movie franchise of all time now.

Of course someone screen shot that, but it's lost in the Twitterverse now.

If only they could make games as good as their movies, eh ;P

I think Sonic is taking his role as the anti-Mario seriously even more than 2 decades later.