The Tiger With Good Manners

Here’s more from Animation World Network: “Channel 4, Lupus Films, and HarperCollins have announced the voice cast for their upcoming animated film, The Tiger Who Came to Tea… Based on the classic children’s book by Judith Kerr OBE, the half-hour film will bring the vivid images and irresistible story of this classic picture book to life.  Benedict Cumberbatch (Sherlock, Avengers: Infinity Wars), Tamsin Greig,  David Oyelowo, David Walliams, and Paul Whitehouse will portray the characters of Daddy, Mummy, Tiger, Narrator and Milkman respectively, while seven-year-old newcomer Clara Ross will make her TV debut as Sophie. Published by HarperCollins Children’s Books and produced by Lupus Films, The Tiger Who Came to Tea tells the story of what happens when the doorbell rings as Sophie and her Mummy are sitting down to tea in the kitchen. Confronted with an unexpected guest – a big, furry, stripy tiger – they invite him inside where he proceeds to eat everything in sight before making a timely exit, just before Daddy gets home. Inspired by the author’s daughter, The Tiger Who Came to Tea was first published in 1968 and has sold over 5 million copies. Lupus Films’ distinctive, hand-drawn animated style will bring the story to life, introducing the characters to a whole new audience. Channel 4 will broadcast the one-off half-hour special this Christmas.” Now we’ll see if it becomes available in North America after it airs in the UK. 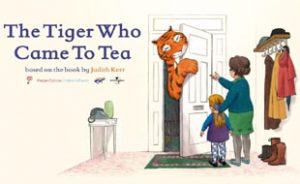 Surely, a metaphor for our modern times if ever there was one!