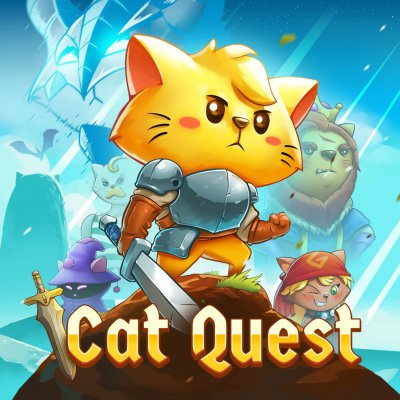 Do feline puns make you cat-atonic or drive you to hiss-teria? Then this game is not for you and you can move on. However if you can’t get enough of the purrfect punny feline punchlines, and like going on a dungeon crawling adventure with action RPG mechanics then carry on.

Cat Quest is a very streamlined and slick action RPG with a catty protagonist. Or at least their spirit companion is, as for the hero themselves they are traditionally silent. However, the other Non-Playable Cats (hereby refurred to as NPCs) are loaded with charm, purrsonality, and the aforementioned cat puns.

The game takes place in a typical medieval fantasy setting and the main antagonists are monstrous dragons, of course. However, the enemy variety is solid and plays well with the streamlined magic system. Each enemy type has their own strength and weakness. Spamming attacks can be done, but the enemies actually telegraph when they will strike back, giving your an opportunity to dodge away and take no damage.

Given that classic action RPGs had a tendency to treat melee combat as a sort of dice roll of you exchanging damage without anyway major way to mitigate directly, including the very first action RPGs such as Ultima and the soon to be remastered classic Diablo 2. While a simple change, this makes it so that if you take a hit then it’s your fault for not reacting. Some enemies you’ll want to rush, others who have spike trap magic will punish you for charging in.

One of the coolest things about the game is that you and the enemies have the same pool of magic spells. They also telegraph the magic they will use with various red symbol warnings moments before usage. This eloquent design allow you to know what’s coming at you, and what your magics can do if you happen to get hit by an enemy spell before you learn it yourself.

For the game’s 7 - 10 hour run time the enemy variety does its job to keep you engaged. If you do happen to take on all the side-quests though, be prepared for some repetition when it comes to the big dragon bosses and kind of get used to the formula of going into a cave and then exiting to progress the quest. However, the quests themselves do cover a variety of characters and intrigue to make them worth playing through.

And while the game may be short, it also has a "mew game" option after you beat it to give yourself challenges to beat the game with some stipulations.

The game very much is one that has a simple plot to get things going. An evil white feline character named Drakoth kidnaps your sister, and now you must take on his army of dragons to help the felines of the Catpital City, the township of Bur-mew-da, and other such places. Did I mention the puns?

The map you play on is litter-ally a map. Which is how you know what town is named as the cat pun names align the caves and towns. The art direction is well done and runs quite smoothly.

Completing quests gives you better gear. This may be the point where some action RPG fans may find the system lackluster as drops are only obtained from chests and completing tasks, and instead of having an array of adjectives that change the properties of your equipment, they simply upgrade the different types to become stronger versions of themselves. There is no equipment management of any type, you cannot become overburdened and you cannot do tasks to upgrade them other than collecting a copy from a chest for an upgrade.

Unless you pick up the crappy helmet, which will downgrade to a crappier helmet. The game’s sense of humor is quite eccentric, which keeps you on your toes as sometimes the things you expect to happen don’t.

If you are a fan of the Action RPG genre you will really enjoy this game. Where the game’s mechanics are distilled to their simplest forms, that simplicity can make for an engaging experience without overcomplicating it. There is no worry about min-maxing your character, or if you will upgrade skills that you may later find to be useless. Through your upgrades to equipment and spells you can usually go one of two directions: go all out in magic casting, in being a melee fighter, or do a bit of both worlds.

Some enthusiasts may see it a bit more casual than those where you need to plan your character out. But for the busy adult who doesn’t want to take a course in slot rune linguistics to get the most out of their experience, this game will scratch that itchy scratchpost of going on a classic action RPG adventure.

My playthrough of Cat Quest: https://youtube.com/playlist?list=PLOzsRHPOHF9BLFkkwyCyTtLK9d2dv8-Fi

I've got this on GOG and I do like both cats and puns...

Wasn't sure what kind of RPG it was until I saw the "computer games" tag. Is it a PC game? A mobile game?

Uh, that's a Green Reaper thing. He tags all video games as "computer games". I got used to him switching "video games" out that I just automatically put "computer games" as the tag. I'm sure others are the same.

I don't know, maybe it's a British thing?

(Sonious didn't really specify any platform, did he? Google says it's available from Steam and for the Nintendo Switch.)

It's on Windows, MacOS, iOS, Android, Switch, and PS4.

It's more that "video games" is a North Americanism. ^^'

In the UK they are broadly interchangable terms (possibly more "computer" because we had a stronger history of using personal computers for games vs. consoles). And in Russia, I understand there is no such thing as a video game. But it is a matter of semi-regular discussion on Wikipedia:

More than ever, they're the same games; usually much the same code. The days of completely different games for different platforms are largely past - except on mobile, which in a way has become the new "console", albeit with less in the way of dedicated hardware and more market fragmentation.

The distinction doesn't make much sense to me - since they're all computers! As opposed to board games" and "video games" - notwithstanding that some have tried to take one sort of game to the other platform. Microsoft has made this more explicit with their Game Pass. But I see consoles that way as a programmer, and for some people consoles might seem more distinct.

We probably call them video games because the NES looks like a VCR and plugs into the Tele.

Probably not... that's what etymology.com is for.

Most of the games I play and review are available on Steam/PC as a platform unless I specify otherwise.

It's one of those things that in such an interconnected world I sometimes forget to go over some details that are usually expected (like what platform) because the information is so readily available that if someone is really interested they'll put it in a search bar in Steam or Google.

Though I can be more aware about platforms in the future.