Review: 'Paws of Fury: The Legend of Hank' 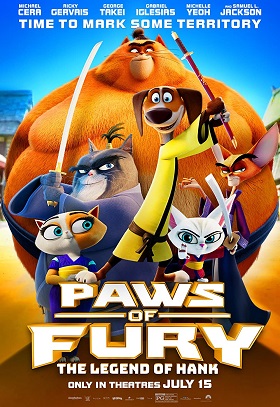 With all the delayed releases for movies in the last couple of years, Paws of Fury: The Legend of Hank fits right in. Of course, it's been delayed a bit longer than most. It was originally supposed to come out in August of 2017. It's been juggled around distribution companies in the last five years, and somehow managed to avoid the straight-to-video route, or the more modern straight-to-streaming path that even Pixar couldn't avoid recently. It's managed to keep hope alive, and now it's finally hitting theaters, and with a plushy summer month release date, too.

Directed by the duo of theatrical feature first time directors Chris Bailey and Mark Koetsier along with veteran Rob Minkoff (with directing credits on The Lion King and Mr. Peabody and Sherman), the movie is set in a cartoon version of feudal Japan inhabited by anthropomorphic cats. When an evil local governor (voiced by Ricky Gervais) decides he wants to get rid of a small village, he finds out he is tasked with finding them a new samurai to help them fight off his own thugs. Thinking outside the box, he decides to send them a replacement samurai that will, by his very nature, offend the sensibilities of the townsfolk so much that he might be the last straw that finally destroys the town. He sends Hank (voiced by Michael Cera), a dog.

If this set up sounds familiar, it should. The movie is a funny animal take on the 1974 Mel Brooks Western spoof Blazing Saddles, but also for some reason set in Japan. Paws of Fury was originally even entitled Blazing Samurai. What the heck are you worried about? This is Edo Japan! You'll be able to sue him! Mel Brooks even shows up to voice the shogun, so he seems to be well aware of what they are doing and completely fine with it. Who says you can't make a Mel Brooks movie today?

The Blazing Saddle connection is a bit of a two edged sword for this movie. On the plus side, people familiar with the older movie will find spotting the various allusions entertaining, whether they are just doing the same bit, except with animated cats, variations, or just subtle Easter Eggs. It's really the highlight of the new movie, if you're a fan of the old movie.

On the minus side, well, most of the new stuff and variations just aren't as good as the original, making this a rather blatant case of the Mystery Science Theater 3000 "Overdrawn at the Memory Bank" problem, which basically says never remind people of a better movie they could be watching rather than your own movie. Also, if you've seen the joke in Blazing Saddles, well, you already know the punchline. And, of course, the real reason Blazing Saddles has mattered as long as it has is that the main joke is not about a dog being sent to lead a bunch of cats, but a black man being sent to a racist white town. Paws of Fury does seem to go out of it's way to avoid making itself a racial allegory. For instance, Hank the dog is voiced by a white actor, while the main good cat character is voiced by Samuel L. Jackson. But due to it's closeness to the original movie, it almost accidentally falls into being yet another movie using different animals as racial metaphors.

The CGI animation has actually benefitted a bit from the movie being delayed half a decade, as though it is fairly obviously a lower budget endeavor than your top tier animation studios, the movie does smartly stylize the animation, not really going for super realism in its look. As this has recently become the trend in even big budget animated movies, it managed to be doing the right thing before it was cool. There's even a fairly neat looking traditionally animated opening section.

So, as we've established, you could still make a Mel Brooks movie last decade, at least, and release one today. Now, the question remains, can you make a good Mel Brooks movie today? Well, I wouldn't call Paws of Fury great, and even good feels like a stretch. But I wouldn't call it bad, either. If you enjoyed Blazing Saddles, I would recommend checking Paws of Fury out at some point, though if you want to wait until it's available to rent or stream, that's probably the way to go. If you haven't seen Blazing Saddles, and are wondering if this movie is still enjoyable if you don't get the in jokes, well, my advice would be just watch Blazing Saddles instead.

Good review, I agree with all your points! It was ok, nothing special - I did laugh out loud at a great visual joke, one not present in the original film. And there were a couple of "wha?" moments: there was no explanation for what Samuel Jackson was doing (the event that started Hank on his journey), plus a late offhand remark from the shogun completely destroyed Jackson's entire motivation and character arc. Wtf writers. There was also surprisingly very little toilet humor, apart from some obvious ones, none of which were cringe-worthy!

I was rather disappointed in Ricky Gervais' voice acting, a lazy directorial evil Brit; he sounded bored out of his mind while trying to make his lines sound ironic. Michael Cera as Hank, the main character... Cera can do a kind of scared warble voice, but that's about it; I wish they'd gotten someone with a little more range.

My fav characters? Two of them! George Takei as the bad guy's main henchman. Always showing loyalty, a positive attitude, and with just the right level of mild stupid to not always be completely helpful. Another great character, in the village, Emiko the kitten who really enjoyed leaping into action and would love to become a samurai herself. She's so much fun to watch! Seriously, you could have dumped the rest of the film and just given me something with those two.

It's also worth warning people that before the film, there's an animated short called "Bad Hamster", based on the Big Nate TV series. It's... uh... something. A good opportunity to step out and use the bathroom.