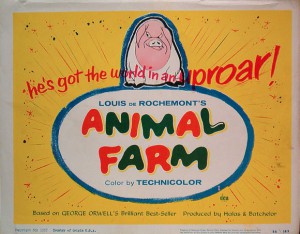 Put the emphasis on “sort of”; fat pig capitalists oppressing other-animal workers have been a common image of communistic (as distinct from Communist) propaganda since long before Orwell. Be that as it may, this is superficially anthropomorphic, although it feels more like humans in cheap animal-head masks.