Aardman Animations’ Wallace & Gromit stop-motion clay (or plasticine) films should need no introduction to Flayrah’s readers. The first, A Grand Day Out, released in Great Britain for Christmas 1989, almost immediately became a sensation in both Britain and America. New short films, the Curse of the Were-Rabbit feature, the Shaun the Sheep TV series, and a steady stream of merchandising have kept the pair (for Flayrah, especially Gromit) alive for almost twenty-five years.

Titan Comics and Aardman Animations have teamed up with The Sun newspaper to produce a daily Wallace & Gromit comic strip!

From May 17th, the inventive duo will feature in their very own daily comic strip in the newspaper, with each adventure running for 6 days, from Monday – Saturday. The comic strip comes after the success of Titan and Aardman’s Wallace & Gromit iphone comic, which was brought out to celebrate 20 years of the famous pair.

Don't miss the start of the first adventure, out on May 17th and let us know what you think!

Man and Dog, Cheese and Crackers

Unless you live in the UK, you might not be aware that the multi-award-winning Wallace and Gromit animation series has been adapted into a full-colour weekly comic strip. Well it has, and now the folks at Titan Comics have collected the strip series (so far) into a new hardcover book coming out this October. “The strip, which appears daily in The Sun, the UK’s most popular daily newspaper, is read by an audience of 2.3 million readers. The full-colour strip features a self-contained, weekly-continuity that sees our plucky, bald inventor race from one hair-brained invention to the next with gusto, extreme silliness and more puns than you can shake a stick at!” Check out Wallace and Gromit: The Complete Newspaper Comic Strip Collection, Volume 1 at Amazon. The strip features stories from a gaggle of writers, all of it illustrated by Jimmy Hansen and Mychailo Kazybird. 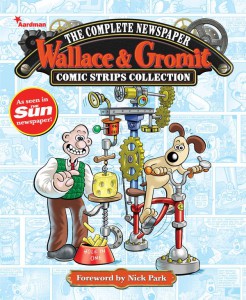 Wallace & Gromit’s World of Invention won the 2010 Ursa Major Award (presented at Morphicon in 2011) for Best Anthropomorphic Short Subject or Series. Now Cartoon Brew has informed us that Lionsgate is releasing the entire 6-episode BBC series (created by Nick Park and Aardman Animations, of course) to DVD and BluRay on March 13th. “Wallace & Gromit’s World of Invention sees world-renowned inventor Wallace and his faithful sidekick (turned camera dog) Gromit turn their hand to presenting for the very first time, hosting a six-part series from the basement of 62 West Wallaby Street. They take an enthusiastic look at some real life cracking contraptions, from gadgets that help around the home to the mind-boggling world of space travel and much more in between.”

British claymation characters Wallace and Gromit have been nominated for this year's Academy Awards - the sixth time in their history.

Their 2008 short A Matter of Loaf and Death has been nominated for the award for "Short Film (Animated)". The film was first broadcast on Christmas Day, and was watched by over half of the British viewing public at the time with 14.25 million people seeing it on BBC One.

However, because it was broadcast so late in the year it missed the deadline to be entered in the 2009 Oscars. Despite this, creator, director and co-writer Nick Park said to the BBC at the time: "We have never made films for awards, though. We do them for the fun of it."

Wallace and Gromit are among the most successful animated characters in terms of Oscars. Every single film featuring them has been nominated for an award, with only their first appearance in A Grand Day Out failing to win, losing out to Creature Comforts, also created by Nick Park.

The other nominees are French Roast, Granny O’Grimm's Sleeping Beauty, The Lady and the Reaper and Logorama. The latest Wallace and Gromit film, A Matter of Loaf and Death, has won the BAFTA for "Best Short Animation".

The film, which premiered to British audiences on Christmas Day last year and was watched more than any programme in 2008, saw it defeat rival shorts Varmints and Codswallop to win the honour.

Film review: Wallace & Gromit in A Matter of Loaf and Death

Posted by The Chained Wolf on Fri 26 Dec 2008 - 03:15
from the Furtean Times
A still from A Matter of Loaf and Death, ©BBC and Aardman Animations

It is Christmas - that time of year when television broadcasters try to find the one thing that will get them the biggest ratings. The BBC has always been best at this. First it was Morecambe and Wise, then it was Only Fools and Horses, and now it is another double act, between one man and his anthropomorphic dog.

Wallace and Gromit could be argued to be the modern day Eric and Ernie. They are the best in British animation and indeed film. After The Curse of the Were-Rabbit (2005), creator, director and co-writer of the series Nick Park decided to return to its original half-hour format. The result has been this wonderful feature - the fourth short film in the series following on from A Grand Day Out (1989), The Wrong Trousers (1993) and A Close Shave (1995).