The Horse Didn’t Do It

Recently on Animation Scoop came the announcement of a new feature-length 2-D animation project called Unstable, which is being developed by “the star studded animation team of Jeff ‘Swampy’ Marsh (Phineas & Ferb), David Freedman (Groove High) and top BBC Comedy Producer, Gareth Edwards (Mitchell & Webb). The three have been looking for the right project to collaborate on since they all worked on the adult animated animated series The Mr. Hell Show (BBC2 and Showtime) back in 2000. ” Unstable tells the story of a police horse who is accused of a crime he did not commit (“un-stable”, get it?), and of the little girl whom he turns to for help. One of the producers describes the film as “Witness meets Oceans 11 bumps into Madagascar“. The film is being brought to the screen by Peafur Productions. 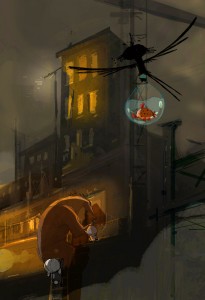