The world of movies lost another big name this week when actor Bob Hoskins passed away at the age of 71. Though he was known throughout much of the world for his dramatic roles (and earned award nominations for several of them), here in the United States he will perhaps forever be best known for his role as gumshoe detective Eddie Valiant, playing opposite a crazed toon bunny in the groundbreaking 1988 live action/animated film Who Framed Roger Rabbit?, which went a long way towards putting animation back on the American landscape after a long slump in the previous decade. But not even counting that, Hoskins had numerous roles in movies with more than a bit of Furry Fandom interest. Some of them cringe-worthy (Mario Brothers, anyone?), some of them wonderful (like the voice of Boris the goose in Balto), and some of them rather obscure (he played Badger in a 2006 British TV movie of The Wind in the Willows). Check out his page at the Internet Movie Database to find out just how diverse his career was. He will be missed. 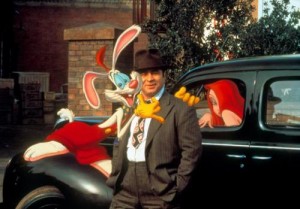