Kendu Films is the creation of Davy Liu, a veteran artist and animator who has worked on numerous projects at Disney — including Beauty and the Beast, Aladdin, Mulan, and The Lion King — as well as at ILM and Warner Brothers. Now he’s started his own production company, hoping to “encourage the next generation with a ‘Can Do’ spirit in every child by bringing great content and encouragement to families everywhere.” To that end he has created a series of five illustrated books, “Invisible Tails — parables told from the animal’s perspective”, whose titles include The Enchanted Tree, Fire Fish, Jordan’s Guest, The Royal Feast, and The Giant Leaf. You can purchase each of these books at the official Kendu Films web site, and also see a collection of development art from these and various film projects the studio is currently working on. 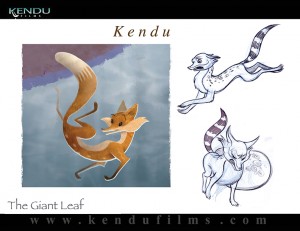