The European artist Peyo (real name, Pierre Culliford) is well-known (or is it infamous?) as the creator of The Smurfs. But he also wrote and illustrated the adventures of a cat, known simply as Pussycat, for Spirou comics magazine. Now Papercutz (well-known as the publisher of Geronimo Stilton) have brought together Pussycat’s comics in one full-color hardcover collection. “This cat isn’t exactly the noble hunting type– he’d rather play a game of kickball with the resident mouse than chase after him– and most of the humor originates from his clever, yet often foolish ways of trying to get what he wants (e.g. milk and snacks).” You can pre-order Pussycat over at Barnes & Noble, and look for the book to hit stores this coming February. 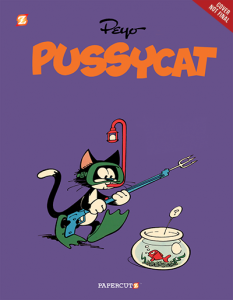