Brynn Methany is an artist who works in “concept art and illustration” (her words). “I specialize in creature design, fantasy illustration and visual development for publishing, film and games.” At her web site you’ll see many examples of her illustrations of creatures both familiar and fantastic — out of this world, literally. You will also see what became of many of those illustrations later on: Witness the trailer for Dust, an independent science fiction movie for which Brynn did both production art and creature design. 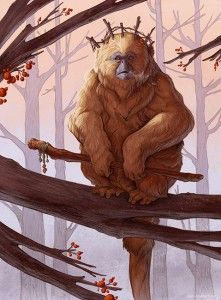