The Boy Who Fell to Earth

In 2012 John Claude Bemis (author of the Americana-Fantasy series The Clockwork Dark) brought us a new post-apocalypse novel for young readers called The Prince Who Fell From The Sky. “In Casseomae’s world, the wolves rule the Forest, and the Forest is everywhere. The animals tell stories of the Skinless Ones, whose cities and roads once covered the earth, but the Skinless disappeared long ago. Casseomae is content to live alone, apart from the other bears in her tribe, until one of the ancients’ sky vehicles crashes to the ground, and from it emerges a Skinless One, a child. Rather than turn him over to the wolves, Casseomae chooses to protect this human cub, to find someplace safe for him to live. But where among the animals will a human child be safe? And is Casseomae threatening the safety of the Forest and all its tribes by protecting him?” Published by Random House, check this out over at the author’s web site. 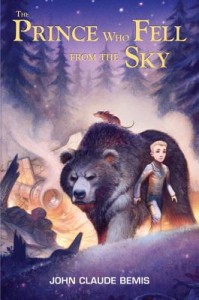