A Doll and Her Cat in The Clockwork City

Image Comics have been proudly announcing their new fantasy graphic novel Hinges, written and illustrated by Meredith McClaren. “This graphic novel introduces the nuts and bolts of a city called Cobble, where one girl new to the city, Orio, must depend on help wherever she can find it. Her assigned familiar, Bauble, has his own agenda however. As the two explore the walls of the city, they find they are not the only new arrivals. ” Her “assigned familiar” appears to be a cat, and Orio herself appears to be… constructed. What does it all mean? Find out when Hinges comes to comic book stores this February. Or, take a read through the interview with the creator over at All-Comic.com. 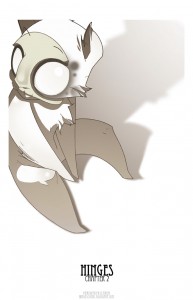