The Boy and the Beast

Can’t think of a better title than that, so why try? Several places on the Net (including Flayrah) have already made note recently of The Boy and the Beast. It’s the latest anime feature from Hosoda Mamoru, the man who brought us Summer Wars and The Wolf Children. As you can tell from those works, the man has an interest in anthropomorphic characters — and this new one just may be his most furry feature yet! The Boy and the Beast “… tells the story of a lonely young boy who strays into a parallel world inhabited by supernatural creatures, where a bear-like beastman becomes his companion and mentor.” It’s set to premier in Japan this July. No word yet on any planned release in North America, but most of director Mamoru’s works have made it over here eventually. Check out the article over at Twitch Film — it includes a trailer with subtitles. 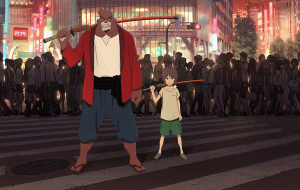