This isn't new, but I haven't seen it posted for furries; so for your amusement and listening pleasure [*cough*], meet Hatebeak and Caninus.

Hatebeak is a death metal band, formed by Blake Harrison, Mark Sloan, and Waldo, a 21-year-old Congo African Grey Parrot. Hatebeak is the only band to have an "avian" vocalist... Their sound has been described as "a jackhammer being ground in a compactor." Aquarius Records magazine called Hatebeak "furious and blasting death metal". Hatebeak made their second record with Caninus, a band whose lead singer is two dogs. (Wikipedia)

If Polly Ran The Ship…

Another discovery from Further Confusion — and we wonder how we missed this before.  Black Beak the Parrot Pirate is a creation of Jennifer Sopranzi, Catherine Van Riper, and Tony Sopranzi, featuring CGI tricked-up photos of real animals as illustrations for their rousing sea adventure stories for young readers.  “In the crystal blue waters of the Southern Seas lies the home of the fierce pirate parrot Captain Black Beak. Welcome to Conure Cove, the beautiful Island home of the brave and gentle beasts and birds who live in this mystic land. These are the first seven tales of Captain Black Beak, the greatest pirate parrot to sail the seas. Long may his tales be told in stories, songs and poems.” Now the first seven short books in the series (all of them available on Amazon) have been collected into a single volume, Black Beak: Pirate Saga, which also includes some new material. You can find out more about all of this at the home page of  Black Beak Press. 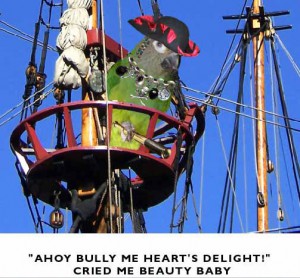 An African Grey is numeralogically smarter than most birds--and some people. He understands a variant on the abstract concept of "none", something very difficult to teach animals.

The teaching techniques used with the parrot may prove useful for instructing learning disabled children. The full story is available here from Science Daily.