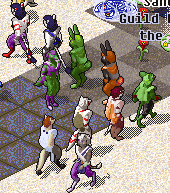 Furcadia is a popular free game, with over 60,000 regular players (users who log in once a month). Player-created areas known as dreams are numerous; many make heavy use of the game's scripting language, DragonSpeak. The game celebrated its tenth anniversary last December.[4]

Dragon's Eye makes money from selling add-ons, including avatar upgrades, sponsorships and gifts for other players. Yearly revenue was under $1 million in 2005.[5]