Yerf goes offline; may be 'the end'

Update (March 11): Yerf appears to be back online. No explanation as yet for the outage.

Yerf is facing its latest crisis . . . although what that is has yet to be announced. A cryptic post by long-time administrator Dingo accompanies the latest 404:

Yerf is no stranger to downtime. The last two years have seen the once-mighty PG furry art archive suffer through extended outages, starting just after Christmas 2004 when the server's hard drive failed.[2] Crucially, no backup of the art or software was available.[3]

The site was down for over ten months, returning only after an effort to rebuild it led by Locoindigo. Yerf remained in a read-only form for two months before full access was restored. Further problems emerged over the third quarter of 2006, leading to several artists demanding that their art be removed from the archives.[4]

Founded by rat on April Fools' Day 1996 as the Squeeky Clean Furry Archive, the site was handed over to Scotty Arsenault in mid-1998,[5] and to Dingo in late 2001. Others contributing to the site's upkeep included temporary server host Tugrik, and the many forum moderators and art reviewers.[6]

Starting as a glorified FTP site, standards were lax until a surge of Sonic the Hedgehog artwork led to a ban on such artwork and the introduction of quality requirements, as well as a change to the current name. Yerf subsequently gained a reputation as an increasingly hard place to join - a fact disliked by artists who failed to meet the grade, but appreciated by those looking for good all-ages art. The archive remained popular through the first half of the decade, along with the VCL, but suffered greatly from the extended downtime, losing ground to alternatives such as ArtVark, Fur Affinity and ArtSpots. 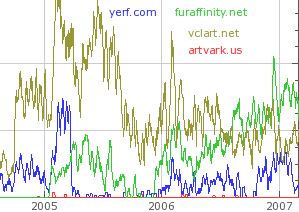 Yerf suffered from downtime throughout most of 2005