Here’s a press release from Fred Patten of the Ursa Major Awards’ organizing group, the Anthropomorphic Literature and Arts Association: “Nominations are now open for the 2011 Ursa Major Awards, intended to recognize the best works published in the field of anthropomorphics last year. Nominations will close on February 29; voting starts March 15 and closes May 4 (to allow last-minute online voting from Morphicon). Furry fans may nominate up to five works in each category.  The 2011 Awards will be announced and presented in a ceremony at CaliFur VIII in Irvine, California, June 1 – 3, 2012. Award categories include Best Anthropomorphic Motion Picture, Dramatic Short Work or Series, Novel, Short Fiction, Other Literary Work, Graphic Story, Comic Strip, Magazine, Website, Published Illustration, and Game. If you cannot think of five worthwhile nominees in each category, see the 2011 Recommended Anthropomorphics List on the Ursa Major Awards website for suggestions.” Remember, something doesn’t have to be on the Recommended List to be nominated. It just has to have furry characters featured in it prominently, and have been released during the 2011 calender year.  So get started! [And we'll see you next after Further Confusion!] 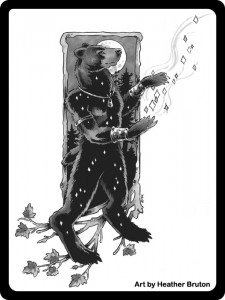