A Little Sympathy for Trolls

Jay P. Fosgitt is a commercial and comic-book artist — among other projects he was the illustrator of Old McMonster’s Haunted Farm (written by Brent Erwin), which we made note of here previously. Now one of Jay’s latest projects (as writer and illustrator) is a full-color comic called Bodie Troll. “Jay’s creator-owned, all-ages comic set in the mythic village of Hagadorn and featuring a grumpy little troll named Bodie. While he aspires to be big and scary, he’s actually cute and cuddly, which confounds his attempts every time.” It’s available now from Red 5 Comics. Check out Jay’s web site to find out more about this and other projects, as well as his commission rates. 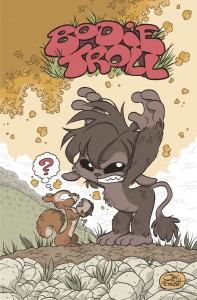 Just saw that preview page. "You don't want to walk into the eye of this fuzzy hurricane" as a threat is rather humorous. The eye of a hurricane is the most peaceful part of the storm. In a way it is symbolic that the threat is hollow, though I think it was just ignorance on the troll's part.

Don't know if it was intentional in the author's part or if I'm just over analyzing.