Stan Lee’s Kids Universe imprint continues to be a good source for new books aimed at kids — and kids at heart of course. Which, often enough, include furries! Dani Jones has been reviewed here previously for her book Monsters vs. Kittens (check it out here). Now her latest work is called Once Upon A Time, and it’s simple: A young pig is trying to tell a fanciful tale, but on each page his various animal friends keep cutting in with their own take on the story. Visit Dani’s web site to find out more about these and other current projects. Also from Kids Universe, look for Reggie the Veggie, written by Dale Mettam and illustrated by Ivan Escalante. It chronicles the adventures of a young, vegetarian crocodile trying to get through his first day at school — and, word is that Reggie might have a game in development as well. Look for both of these new books to come out this July. 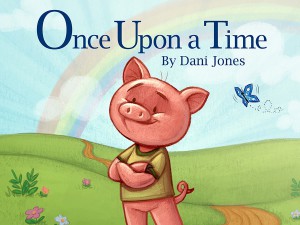 I dunno about furries reading young children's books, to be honest . . . sure, stuff like Redwall, and maybe Ursula's Nurk or Dragonbreath series, but not works aimed at the 4-and-up set.

If anything, we're less likely to be interested than the average person because relatively few of us have children.

I have been requesting review copies of anthropomorphic fiction that I think Flayrah's readers will be interested in, which does include a lot of Young Adult books and some juvenile fantasies like Brian Jacques' Redwall novels, Garry Kilworth's Welkin Weasel series, and Curtis Jobling's Wereworld novels. But I have assumed that Flayrah's readers are generally not interested in the "Billy Bunny's Birthday Party" picture books for very young children, even if the characters are usually funny animals. Does anyone want reviews of those?

Not the really young kid's stuff no; I doubt Flayrah has the audience for it. Btw Fred, Eric Elliott and Carol Wolf have published a young adult fantasy book about were-coyotes called Coyote Run. It's electronic for now - he says a hardcopy should be available soon.

Sounds interesting. Do you have an address for either Elliott or Wolf so I may request a review copy?

I couldn't find Eric's (though he has FA and dA accounts), but Carol's is listed on her LiveJournal profile.

I don't know his e-mail, so I left him a note on FA giving him yours, if that's ok - I don't know how often he logs in to check though.

For the most part, I'm inclined to agree that anthropomorphic books targeted at younger children are not likely to be of much interest to Flayrah readers, but there may be some exceptions. For example, I think a retrospective on The Berenstain Bears would be well received, as would a story on any children's book author whose works also appeal to adults, such as Maurice Sendak or Dr. Seuss. But they're the exceptions, not the rule.