A Fairy and Her Furry Friends

If you haven’t already, now’s a good time to get caught up with Knightingail, a full-color fantasy comic book series created and written by Wayne Gardiner.  Illustrated by several fantasy artists (currently, Mell Joy San Juan), it tells the story of a fae princess named Knightingail who discovers she not only has the power to heal by magick… but she is also destined to battle a great evil creeping in upon her forest.  Along the way she’ll meet and interact with heroes and villains of many species — many of them decidedly anthropomorphic.  Having finished the first series (The Legend Begins), Mr. Gardiner and his crew have now launched into the second 6-issue story arch, Shadow Divisions. The first issue is out this month from Big Dog Ink. To see more of what we’re talking about, check out the preview trailer that’s up on YouTube. 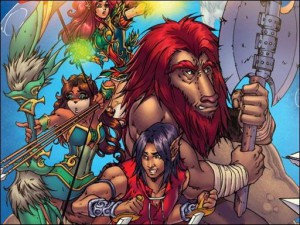