We Should Not Forget the Elephant

Straight from the folks at Animation Scoop: “Gnosis Moving Pictures CEO Darius A. Kamali and Whisper Pictures CEO George Merkert announced today that the companies are partnering on the animated feature film Tusk: Hannibal’s Favorite Elephant. The project, which was co-written and will be directed by Whisper Pictures’ Oscar-winning Chief Creative Officer Tim McGovern (Tron, Total Recall, As Good as it Gets and currently, Sin City 2), is a family-friendly epic adventure that tells the story of legendary military strategist Hannibal and his favorite elephant Surus, as they seek justice from the Romans. The project, set in 218 B.C., follows Surus and Hannibal as they lead an army of men and 37 African elephants over the Alps, and the deep connection that develops between a man and animal bound by shared hope and common loss. ” Really now. No word yet on a projected release date, but keep your ears spread. 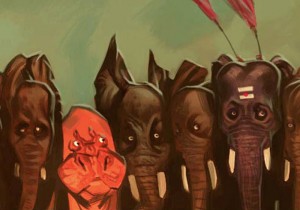