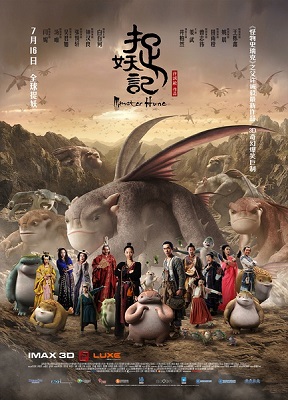 My review can be summed up as, “Ehhhh.” No exclamation mark; it’s not worth it. Both the CGI animation and the live-action acting are excellent, but from the trailer I was expecting an action adventure fantasy with some comedy. Instead, it’s almost entirely a slapstick comedy with funny CGI monsters designed to amuse rather than look dramatic.

In the dim past, humans and monsters shared the world peacefully. Then the humans decided to conquer the world, and drove the monsters into hiding. Human monster hunters catch the few monsters who return to the human world disguised as humans, for bounties. There is a fierce rivalry among the monster hunters to capture the most monsters.

Now (in classical pre-modern China), there is a revolution in the monster world. A usurper, Ge Qianhu, overthrows the Monster Queen who flees to the human world. He prepares to invade and conquer the human world with an army of monsters disguised as humans.

Song Tianyin (Boran Jing) is a food stall proprietor, grandson of a monster hunting old woman (Elaine Jin), and the nebbish-y mayor of a little village near where the Monster Queen is hiding. Into his food stall come Fat Ying (Sandra Kwan Yue Ng) and Zu Gao (Eric Tsang), a monster couple disguised as humans, and separately Huo Xiaolan (Baihe Bai), a young woman monster hunter desperate to catch a monster and collect the bounty on it. She is a rival of Luo Gang (Wu Jiang), an older and more experienced monster hunter who takes over all the monsters she finds. (She calls it stealing; he claims it’s fair rivalry.) Xiaolan tries to capture Ying and Gao; Luo Gang arrives to complete their capture; the food stall is demolished; Tianyin flees into the countryside and runs into the monster usurper’s soldier who has found the pregnant monster ex-queen and is trying to kill her. The monster queen briefly gets free, finds Tianyin, and impregnates him with her egg before being killed.

Xiaolan follows Luo Gang to get “her monsters” back. Tianyin joins her as a “monster expert” to demand help for the monster baby inside him. Xiaolan decides that a monster baby will be easy to handle, so she accepts his company. There is much comedy about a pregnant man giving birth. The monster baby, Wuba, looks like a four-tentacled white daikon radish; there are jokes about big white radishes for the rest of the movie. Xiaolan plans to turn Wuba in for the bounty; Tianyin is conflicted because he can’t help feeling paternal/maternal to Wuba. Babies are cute, including monster babies. Eventually Xiaolan and Tianyin fall in love and both become protective of Wuba; but there are the menaces of not only Luo Gang, but of Ge Qianhu, the monster usurper now disguised as a handsome human nobleman and head of the monster hunters (Wallace Chung), who wants the baby killed as the rightful heir of the legitimate regime. The climax is action-packed but never suspenseful.

The dubbing is horrible. It’s technically well done, but it’s obvious that no professional English-speaking voice actors were used. Voices are amateurish and dull, too obviously reading from scripts. Voices are not matched to bodies; large-bodied men have light voices. If you do see Monster Hunt – it’s not bad, just don’t expect more than kiddie entertainment - try to see the subtitled version with the Mandarin voices that sound Just Right.

Don't miss the end credits over the monsters dancing to lively and funny Gangnam-style music.

I... might have mentioned the film in the comments for the 'Little Door Gods' article: https://www.flayrah.com/6237/little-door-gods-features-anthropomorphized-gods#co...