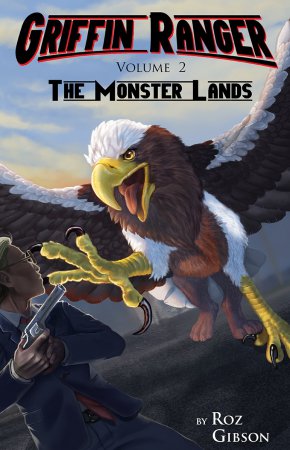 Gibson’s massive “Griffin Ranger” novel was a long-held dream, one that she had developed in her imagination for years. She finally began putting it to paper during this decade. The first chapters that she sent to her friends draw an enthusiastic response, but it was much too long to publish as a single book. She ran a successful Kickstarter campaign during 2014 to cover not only its publication but to include full-page illustrations. “Griffin Ranger. Volume 1, Crossline Plains”, 387 pages, debuted at Further Confusion in January 2015.

This left the even longer conclusion. In 2016 a second Kickstarter campaign was run. It was successful, planned for the book’s publication at Further Confusion 2017. Unexpected delays prevented it from being ready in time. Gibson took advantage of the delays to get a better cover and interior art.

“Griffin Ranger. Volume 2, The Monster Lands”, 557 pages, has now been published in August 2017. It is available as a trade paperback from the FurPlanet catalogue or in electronic form from Bad Dog Books, and on Amazon in both trade paperback and Kindle editions. As a single novel “Griffin Ranger” would run 926 pages. There is a What Has Come Before in “The Monster Lands” to bring the reader up to speed, but readers who have not started “Griffin Ranger” are advised to begin with “Crossline Plains”. The entire novel is worth the journey.

Unfortunately neither this review nor the info on the page selling the book explains whether the main character is a gryphon himself or a human that rides gryphons. This knowledge would be useful to me in deciding whether to try it out.

This isn't a review. It's an announcement that the book has been published after 2 1/2 years. The entries on Amazon and the Bad Dog Books and FurPlanet catalogues will give you more information about this volume 2's plot and about volume 1, Crossline Plains.

Yes, the main character is a griffin himself (Gibson doesn't spell it gryphon, although the spelling doesn't matter), not a human riding one.

Here is some art.