Party Animals: How American politicians got their fursonas

Early next month, Americans will vote for various political offices, including President of the United States, the U.S.'s head of state. This is usually considered a pretty big deal in America, and even the world in general, as America still manages to wield a lot of political, economic and even cultural power on the world stage, despite itself. Some of the idiosyncrasies of the American political system may be a bit opaque to non-Americans (no, we don't really understand what the Electoral College is supposed to accomplish anymore, either). One aspect that seems to be uniquely American is the strong identification of American political parties with certain animals.

American politics has been been dominated by two parties, the Democrats and the Republicans, and every President since the 1860s has belonged to one or the other. At a local level, "third party" candidates and non-aligned "independent" candidates are more likely to gain office, but the two party system still is mostly followed even at the local level. George Washington, the first American president, is the only one not officially associated with a party, and even then, despite his personal misgivings about political parties, many historians agree he probably would have been a member of the Federalists if they'd coalesced early enough.

The first of the two major American parties to gain an animal symbol was, appropriately enough, the first party to coalesce. Unlike it's political rivals, however, the Democrats have never formally adopted an animal mascot, and the reason for this is actually fairly obvious if you stop to think about it. Nobody wants to be the jackass. 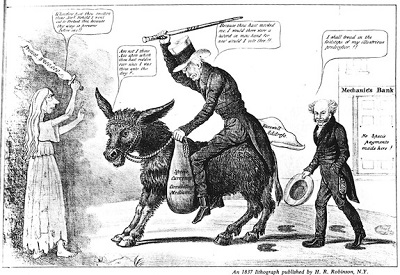 The donkey was used to symbolize the Democratic party from the very beginning, though not by the Democrats. Political rivals of Andrew Jackson were literally calling him a jackass by using the animal to symbolize him. However, this backfired a bit, as Jackson began to use the donkey to represent himself, partially to basically just troll his rivals, but partially because it was argued that, despite it's lowly place in society, the donkey was actually a very useful animal, and was used by Jackson and his supporters to show his appeal to the "common man". Additionally, whether or not you consider the donkey's fabled "stubbornness" to be a plus or a minus, Jackson himself was famously stubborn, so it fit him. 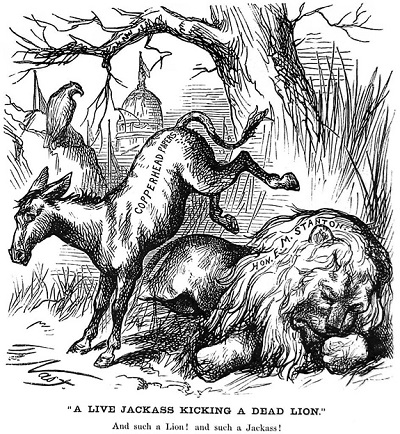 However, once Jackson left the presidency, the donkey actually faded from use by the Democrats. It was brought back into the limelight by the cartoonist Thomas Nast, who frequently used animal symbolism in his political cartoons, especially taking inspiration from Aesop's fables. He was apparently completely unaware of the Jackson/jackass connection, though his use of the animal was the same as Jackson's rivals. It should be noted that Nast, though on the Republican's side, usually only used to the donkey to symbolize the negative aspects of the Democrats. When showing the Democratic party in a more neutral light, he usually showed the party as a fox. This is probably inspired from Aesop, and especially the fable of the "The Ass in the Lion's Skin", where the fox figures out that the "lion" everyone is afraid of is really just a jackass after all. A tiger was also occasionally used. 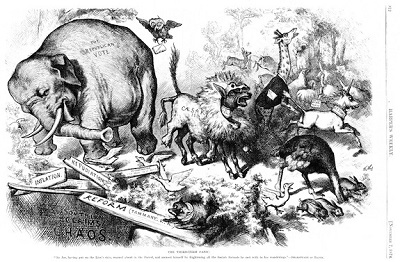 There doesn't seem to be any particular reason Nast chose the elephant to represent the "Republican vote". Possibly in the original cartoon, which used the above-mentioned "ass in lion's skin" imagery, the elephant was chosen because it was an animal that wouldn't be frightened by a lion, real or fake. It could also have been chosen to represent an animal that seemed unstoppable (as the Republicans did at the time). Whatever reason, the elephant became Nast, and then the nation's, go-to symbol for the Republican party.

For American parties represented by animals that are actually native to America, you have to look to the third parties.

Though third parties have not had a particularly successful time in American politics, a few have managed to stick around and effect the two major parties in sometimes very big ways. One of the most successful was Theodore Roosevelt's Progressive (or Bull Moose) party. The party was formed when former president Theodore Roosevelt ran against incumbent Republican president William Howard Taft for the Republican nomination. Roosevelt barely lost the nomination, declared himself "fit as a bull moose", and started up his own party. He went on to soundly thrash Taft in the general election (the only time a member of a third party has beaten one of the two main parties since they became the defaults), though the Democrat Woodrow Wilson won the election in the end.

The Electoral College's function is to prevent the succession of less populous states from the union. It was a compromise between a pure democracy and a pure state-compact.

One extreme wanted things based on populous vote alone, but that would mean that large urban cities would become 'in-groups' that decided all elections. On the other hand the other extreme wanted each state, no matter the size, to have 1 vote/point per state. But this would mean if you got a state with low population rural centers to have more sway. So that's when the Senate was designed for the later (points based on pure statehood), and the House was designed for the former (points based on populous). The total is the number of points each state gets toward picking a president.

In this way, everyone hates the system, but not enough to leave it.

Though the more populous, urbanized states are working hard on some work-arounds...

Yeah, heard of that:

One logistical issue they may face is that time zones are a thing, so a state under the agreement does have to wait for national results. So those on the east coast that have their results come in early may have the state declared a winner for one side, and then maybe the other coast swings the national vote in the opposite direction. Citizens would suddenly see their state (if part of this block) flipping, because mainstream media likes putting colors on maps as soon as possible.

So the effort may be sneaky, but as soon as it happens, that's a whole other ball-game.

The more specific reason why the U.S. Libertarian party chose the porcupine as their mascot animal: Here is an animal that is calm, non-aggressive, even friendly... but if you try to attack it, you're in a lot of trouble.

One furry has been doing some political comics utilizing the donkey and elephant symbology.

They also have other appearances by the porcupine.

No bull moose yet, but they haven't been active for decades...

This is a very interesting post!
I should note that donkeys aren't really that stubborn, they're more kind and curious than horses generally.

Mm! I’ve read that any ‘stubbornness’ displayed by donkeys tends to be when someone is trying to force a donkey to do something it knows is dangerous and so refuses to do it! So, the angry owner who only cares about getting it to do the thing calls them ‘stubborn’ and ‘stupid’ when actually it’s because they’re smart enough to recognise danger, and won’t be forced into it, unlike the more flighty horse (no offence meant to horses) that can be scared/startled into doing something unwise!

I'm really more of a left-libertarian, but I have to admit that's a badass porcupine.

Kind of a weird update out of nowhere, but there was a modern revival of the Whig name for a party I'm just learning about now; it ceased to function two years ago, but anyway, they used an owl. However, the original (and, honestly, only one that ever actually mattered) were never really associated with the bird. But, I have seen the owl used as a symbol for the 1800 Whigs retroactively, so if you see that in like a YouTube thumbnail (that's where I saw it) or something like that, that's where they got that.