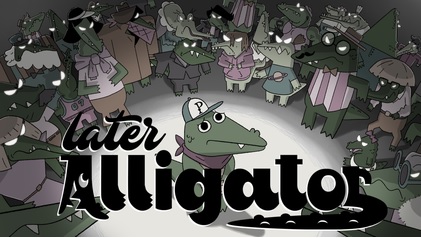 It seems so simple, but is it?

I think one of my favorite parts was one where you played a game of three finger fillet (they don’t have five fingers) with a tough guy on the bad side of town. Though you end up using spoons— to start. It kind of escalates from there.

Besides the great animation, there is also excellent writing. At first I kind of panned that after about the first person interviewed, as I had already figured out what this plot against your client was. Oh, there’s going to be games there, you don’t say, Pat did mention it was his birthday today. The fact that Pat thought someone was going to kill him and it was just a surprise party was quite fun as a premise, and gives the adventure a quaint all ages feel while having a mature edge to it.

In speaking of edges, after my second playthrough, the game did something that most media fails to do narratively. It surprised me. It turns out to be the case that indeed, while there was a birthday party, it was also true that there was an assassin after your client.

But who would be so dastardly as to off such a nice alligator? Interestingly there were very subtle hints along the way. Particularly the video that was linked earlier, which is why I liked this moment so much. It was not only a funny interaction but it was also an important point where your own character gets subtle development and not until you reflect after that moment do you see it.

Why were you carrying that knife around? And then you see it in the options menu and you see a very kempt briefcase that has spare gloves and mints to cover your breath. While I have no experience with being an assassin, having a character with a pinstripe suit did suit me personally.

The game did a good one on me, because while I was boasting in pride at how quick I was able to sniff out the surprise birthday, these more subtle clues as to your intentions were hiding in plain sight. Speaking to your own nature despite your silent demeanor. And it’s for that very reason that Later Alligator will stick in my mind far after I played it. It got me good.

Hopefully if you planned to play it, you heeded the spoiler warning, you can’t say you weren’t warned.