The Professor and his Friends

Also from Creative Mind Energy comes The Adventures of Professor Wallaby, a series of illustrated books for young readers by two of the minds behind CME: Damian Wassel (story) and Nathan Gooden (art). “One quiet spring morning, on the far, far  side of the island of Roo, an old wizard, Professor Wallaby, wakes to find Yazz, a helpless yak, caught by a gang of rats. Little does the Professor know that this mornin will spark a long series of adventures for him and his new friend. Filled with ancient secrets, dazzling warriors, fearsome pirates, close calls, and struggles of magic and might with a dark wizard seeking revenge, The Adventures of Professor Wallaby spans nine books, showing us all the true power of friendship”. Again, find out more at the CME web site. 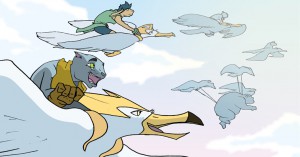 Researchers found the highly-potent compound, tagged AGG01, was active against a wide variety of fungi and bacteria including antibiotic-resistant superbugs.

Research team leader Dr Ben Cocks said the discovery could have a profound impact on both human and animal health.

"This compound has the potential to be commercially synthesised and may prove vital in the war against increasingly resistant human and animal diseases," Dr Cocks said.

He said researchers from the Victorian government's Department of Primary Industries made the discovery while investigating the chemical properties of Tammar wallabies' breast milk to determine how their immune-deficient newborns built up resistance to bacteria while in the pouch.

Using online biological information, they searched the wallaby's genome to identify more than 30 factors in the breast milk that contribute to fighting bugs.

Compound AGG01 was found to be effective against a relative of the hospital superbug MRSA, or golden staph, as well as ecoli, Streptococci, Salmonella, Bacillus subtilus, Pseudomonas spp, Proteus vulgaris, and Staphylococcus aureus.

Two young joeys, partly hairless, pouchbound and suckling, were stolen from a special viewing enclosure at England's Dudley Zoo. The theives broke into the heavy glass enclosure late Friday night, and the curators of the exhibit worried they wouldn't survive the night without their mother. The babies were quickly found, though, when people spotted children carrying them across a road 20 minutes after the robbery. They were later found in a gypsy camp outside the town. Perhaps a late Christmas gift?

Beanie, a nine-month old albino wallaby in a UK theme park, has undergone a cataract operation to restore his sight. It's the first time this surgery's been attempted on a wallaby.