In that same article at Broken Frontier in which we found out about the new Dragons comic they announced another new comic book of some interest to Furry Fans. The Weirding Willows, created by Dave Elliot, has previously run only in the comic anthologies A1 and Heavy Metal. Now Titan Comics have gathered together the first story arc — along with a brand new chapter — in hardcover. “When she was nine, Alice wandered into the Wild Woods and discovered a portal to another world. A world called Wonderland! Now a young woman, she has spent her childhood discovering just some of the wonders the dimensional nexus of the Weir has to offer – a place where the worlds of Earth, Wonderland, OZ, Neverland, Mars, Pelucidar and Elysium collide, and where anything, and anyone, could turn up when least expected!” The first story tells what happens when Alice’s father, Dr. Moreau, makes a dubious deal with the Wicked Witch of the West. Not to mention having Mr. Toad and his associates show up.  This full-color collection is available later this month. 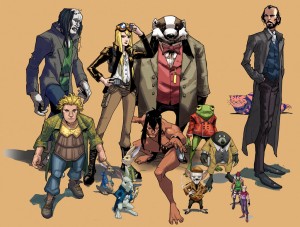