Sometimes it’s best to just let the thing speak for itself: “Allison Breaking is a talented journalist with her own blog and a lot of bills to pay, so when she receives an offer from a mysterious stranger named Burma to write his memoirs, it’s an offer she can’t refuse, not even with all the red flags popping up. But Burma is quite literally unlike any man Allison’s ever known – because he’s a cat. And this cat has stories to tell about how he (over the course of a few lifetimes) has shaped the world – and another, darker story that Allison must risk all to uncover… a story of what this particular cat has been doing with the last of his nine lives.” That’s the story of I Was The Cat, written by Paul Tobin and illustrated in full color by Benjamin Dewey. The hardcover graphic novel is coming this August from Oni Press. 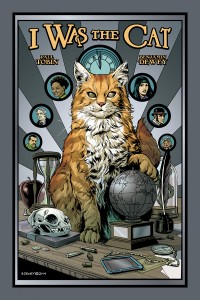