If you’re not familiar with Larry Niven, you should be. For one thing he was Guest of Honor at Further Confusion once — largely for his creation of the brutal tiger-like aliens known as the Kzin. In 1970 his novel Ringworld received both the Hugo and Nebula Awards for Best Novel. Now, many years later, Tor Books is creating a series of black & white manga-style graphic novel adaptations of the book. “Two-hundred-year-old human Louis Wu is recruited by a two-headed alien named Nessus to join him, a felinoid warrior alien named Speaker-to-Animals, and the infinitely lucky human Teela Brown to explore an alien artifact. They find a Ringworld, a ribbon millions of miles long built around a distant sun. The civilization has fallen into savagery, though, and after crashing into the Ringworld, Louis must come up with a clever plan to get back to known space, hundreds of light years away.” Adapted by Robert Mandell (script) and Sean Lam (illustration), Part 1 is available now in paperback at Amazon.

[And with that, we'll see you after Comic Con!] 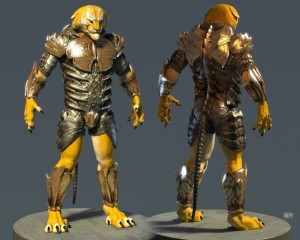 I've enjoyed a few of the Kzin stories, but it may be worth mentioning that not everyone thinks so highly of Larry Niven.

One of the forgettable Kzin books (cathouse by Dean Ing) had a slightly racy tone and a luscious snarly female cat on the cover. I got it at age 13 and shortly after it led me to this thing called furry on the 90's internet.

That was a good Uncle Kage story, very good. Thanks!

This cover, by Larry Elmore? "Cathouse" has had several covers over the years, but this is the one that features "a luscious snarly female cat on the cover".

I reviewed it in Yarf! #7, back in September 1990. Fortunately, Cubist's Anthro has put the review online.

Thanks Fred, that's the one. Rarr. At the time, I just had to copy the art except with certain embellishments, haha. I thought the cover art was the best part of those stories. Even when I was a fan of that kind of sci fi, I thought they were just kind of OK.

These days I'd most prefer 1960's era "new wave" sci fi, with the literary experimenting. That or stuff where story and character takes precendence over gimmicky high-concepts, like making orbital mechanics the star of the story, or something. I thought Larry Niven had his best stuff in the late 60's/early 70's. (But my opinions aren't exactly up to date. I wish I had more time to read fiction these days.)

Titan Books in London has just sent me a review copy of "Koko Takes a Holiday" by Kieran Shea, published in June, which I am reading now. Shea is American, but this has a very "New Wave" sci-fi feeling mixed with Gibsonian cyberpunk. "A jet-powered, acid-fueled trip of pure, rocking insanity." "Five hundred years from now, ex-corporate mercenary Koko Martstellar is swaggering through an early retirement as a brothel owner on The Sixty Islands, a manufactured tropical resort archipelago known for its sex and simulated violence. Surrounded by slang-drooling boywhores and synthetic komodo dragons, the most challenging part of Koko's day is deciding on her next drink. That is, until her old comrade Portia Delacompte sends a squad of security personnel to kill her."

Well, it's a change from paranormal romances. This is apparently the first in a series of "Koko" novels from Titan. Why can't furry fiction get a patron/sponsor like Titan?

I read all of the books in the Ringworld saga.Great stuff! I am now reading the "worlds" novels by Niven that takes place 200 years before the events in Ringworld.Will definitely have to check out this graphic novel!