Tooth & Claw is a new severely-anthropomorphic full-color comic book series from Image Comics, coming our way this November. Check out the preview pages over at Image’s web site. “Tooth & Claw, the exciting new series from bestselling writer Kurt Busiek (Marvels, Astro City), artist Benjamin Dewey (I Was the Cat, Tragedy Series), Eisner-winning colorist Jordie Bellaire (The Manhattan Projects, Pretty Deadly), and letterer John Roshell of Comicraft that was announced at Image Expo in July, will launch on November 5. The highly anticipated fantasy epic can best be described as Conan meets Kamandi with a Game of Thrones-style storytelling experience. In Tooth & Claw, a secret conclave of wizards brings a legendary champion forward through time from the forgotten past to save the world—with disastrous consequences. Featuring swords, sorcery, beast-wizards, gods, sprawling animal empires, golems of radioactive decay, crystalline badlands, con women, ancient armories, young love, mystery, blood and death and treachery and destiny… Tooth & Claw is the sprawling, world-building fantasy series readers have been waiting for.” It should be noted that this new comic is being marketed as aiming for mature readers — meaning it will not scrimp on the violence or the nudity. And this is from Image! 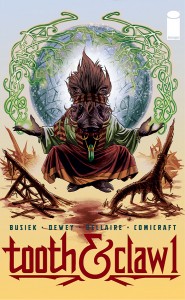