Find Your Spirit Animal… Or Else!

Writer C.R. Grey has created a new fantasy series for young readers that’s described as “Drawing on the traditions of Harry Potter and His Dark Materials… a fantastical boarding-school adventure with steampunk sensibilities and political intrigue…” The first book in the Animas series, Legacy of the Claw, goes like this: In a world where everyone eventually hooks up with a non-human animal, known as a “kin”, in a spiritual connection known as an “animus bond”, 12-year old Bailey Walker fears that he will become an outcast if he doesn’t find his own kin soon.  But darker forces are at work in his world… forces that seek to enslave all the kin and destroy the power of animus forever. This new series is available now from Disney-Hyperion. Check it out over and Barnes & Noble. 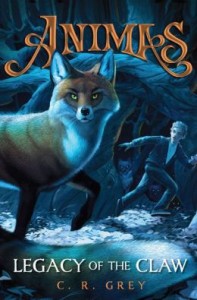