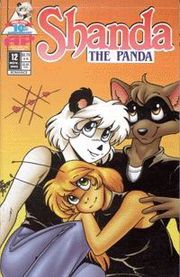 Fans of Shanda The Panda face a bittersweet celebration next year, as its creators plan the 50th – and last – issue.

Mike Curtis has announced the end of the series, and a conclusion to Shanda Fantasy Arts, which he has run with his wife and Katmandu creator Carole since 1996.

Still to be published by Anthrocon 2011 or MFM 15 are Katmandu #37, a new issue of Tales of the Morphing Period, adult title Shanda's Bedtime Blowout (possibly in 100-page squarebound format), and Shanda #49 and #50.

Shanda first appeared in A Very MU Christmas, published in 1992 by MU Press. The last issue will feature her marriage, with cover art by Michele Light, a story by Benjamin 'BAR-1' Rodriguez, and a second story illustrated by original Shanda artist Mike Sagara.

The end has come in part as a result of Diamond's raised profit requirements for distributed comics.

While not ruling out potential one-offs, Mike explained that both he and Carole were "feeling rather old lately" and wanted the characters and their company to "retire with dignity".

While KATMANDU 37 is the last issue, it is not the last KATMANDU story.

Carole has written a conclusion to the series, and it will run as a backup in SHANDA 49, along with the conclusion of Kitt Mouri's KATMANDU backup serial.

We do reserve the right to come out with a new comic at one time or another.

And I am looking into doing QUINN THE RACCOON as a webcomic after I finish my Dick Tracy project. www.plainclothescomics.com