Benjamin Bear gets his way — Often by methods that are quite unusual but somehow they work. Now he’s back in his latest full-color book for kids, Brain Storm. Check it out over at the Toon Books web site: “The out-of-this-world outlook of a down-to-earth bear! Benjamin Bear can always surprise his friends, whether it’s by walking on his hands during a snowstorm or by using a tree as a parachute. His zany approach to life has earned him two Eisner Award nominations and bestseller status among kids everywhere. French star author Philippe Coudray continues to delight readers by bending the rules of common sense and breaking the laws of physics.” Also look out for the other Benjamin Bear comic books in hardcover, Fuzzy Thinking and Bright Ideas. 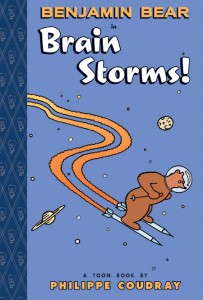