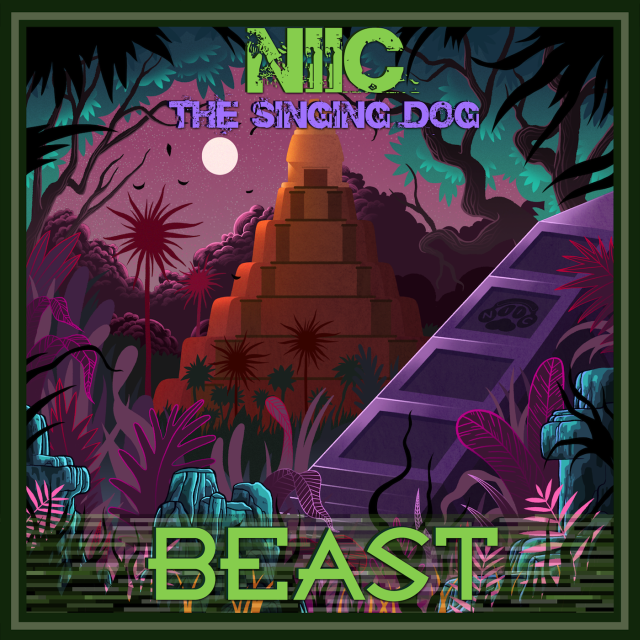 All NIIC's merchandise can be ordered off his own website, including some clothing, posters and accessories, which I did not order. There are different prices for the US and International version, which I assume is due to postage costs; however, ordering multiple CDs does not lead to any decrease in price. I bought Beast ($13.99 US, $23.99 International) and CD Trilogy Sale, which is all three previous albums bundled together ($21.99 US, $31.99 International).

I had no problem ordering or paying for the CDs and delivery was rapid and painless. I placed the order on the 4th, was informed it had been shipped on the 5th and received it on the 12th, just five working days later. That's from the US to Austria. One nice extra was that a NIIC button badge was included for free; I'm guessing for making a fairly large order. There was a slight dent in the metal but it was only apparent on touch.

The CDs themselves appear to be made on demand, rather than mass-produced. This is perfectly understandable to keep costs for small volumes – however, it leads to variations in quality. The sleeve booklets are manually folded and do not always fit perfectly into the case, and the printing quality for the three earlier releases is poor. It's sometimes difficult to read the track listing, and the small copyright blurb is completely illegible. Strangely, if they're printed on demand, Beast has far higher image quality, both for the booklet and the CD printing. All CDs come signed by NIIC.

The music itself is all high quality. I will restrict myself to Beast, as it's the one I have listened to the most, but I believe it applies to the other albums as well. It can all be called weak furry music, in the sense that it is music created by a fur, but some tracks are strong furry music, where the music itself is furry. The album starts with two of those, the first being the introduction which refers back to his earlier work in the lyrics.

Because I am Unleashed... And I trust Instinct...
I am NIIC the Singing Dog... AND I AM THE BEAST!

Unleashed and Instinct being his first two full-length albums and Beast his third and most recent. I found this referencing pleasant, as it built a collective narrative – a theme extended by some tracks revolving around his fursona and its back story. It was great when I listened to earlier tracks to hear lyrics that linked to and expanded on scenes or story lines that I was aware of. It created cohesion.

In terms of genre, although NIIC has, in one of his songs, classed his work as electro-pop, I found Beast to have some nice variety. "Introduction: I Am" is not so much a song as narrative with a brilliant audio build up. The titular "Beast", "Our Time Will Come" and, to a lesser extent, "The Doghouse" seem to influenced more strongly by rock. And "Could You Ever" is a really beautiful ballad.

I recommend supporting NIIC and getting his work. The quality of the physical product is mid-way between other furry musicians I've bought from; Fox Amoore, who has professionally printed CDs and Zeta (a friend of mine) whose video game-inspired music is only available digitally. However, the music quality is top notch – it's catchy, and you can try out all the tracks for free before deciding if it's something you would like.

NIIC will be performing live at Fur-Xoticon on 27 May, and is offering personalised song commissions for $199.

Random trivia that did not get worked into the article itself. NIIC is not consistently named on the CD tracks. The songs import with "NIIC the singing dog", "Niic the singing dog" and "niic." If I recall them all correctly. I just changed everything to "NIIC."

The comma may be official in South Africa, but it's not a usage most English-speakers are familiar with, nor what NIIC uses. Similarly, the interpunct was officially advocated in the UK, but its use would most likely cause confusion nowadays. It'd make more sense if Euros or possibly the South African Rand were being used. (The latter has bigger problems.)

Several nations have decided in just the last two or three years that if the U.S. ($), the U.K. (£), and Japan (¥) can have their own currency symbols, not to mention the European Commission’s euro (€), so can they. So we now have the Indian rupee (₹), the Russian ruble (₽), the South African rand (R), the Thai baht (฿), the Costa Rican colón (₡), and others. (The symbol for the Armenian dram apparently can't be reproduced here.)

When I was a boy collecting postage stamps in the late 1940s, I noticed that Portugal was unique in using its currency sign ($, in this case for the escudo) for its decimal separator. Not $10.00, but 10$00. Did Portugal keep doing that until it replaced its escudo with the euro?

The Rand has had that symbol for decades. Since it first came into existence I think.

That last bit is not fair. It's nothing to do with decimal markers. That's what happens when the president is completely corrupt and builds a network of bribery and connections that enrich a small few who no longer care about what happens to the country.

Rakuen, I don't understand your last comment. Are you saying that the reason Portugal marked its prices as 10$00 or 125$60 for decades -- since Portugal became a republic in 1910 -- was because its president was completely corrupt and built a network of bribery, etc.? There have been several Portuguese presidents since 1910. Salazar was a dictator for decades, but not all the time since 1910; and he was a technocrat who oppressed people for ideological reasons, not to enrich himself.

That was a reply to GreenReaper.