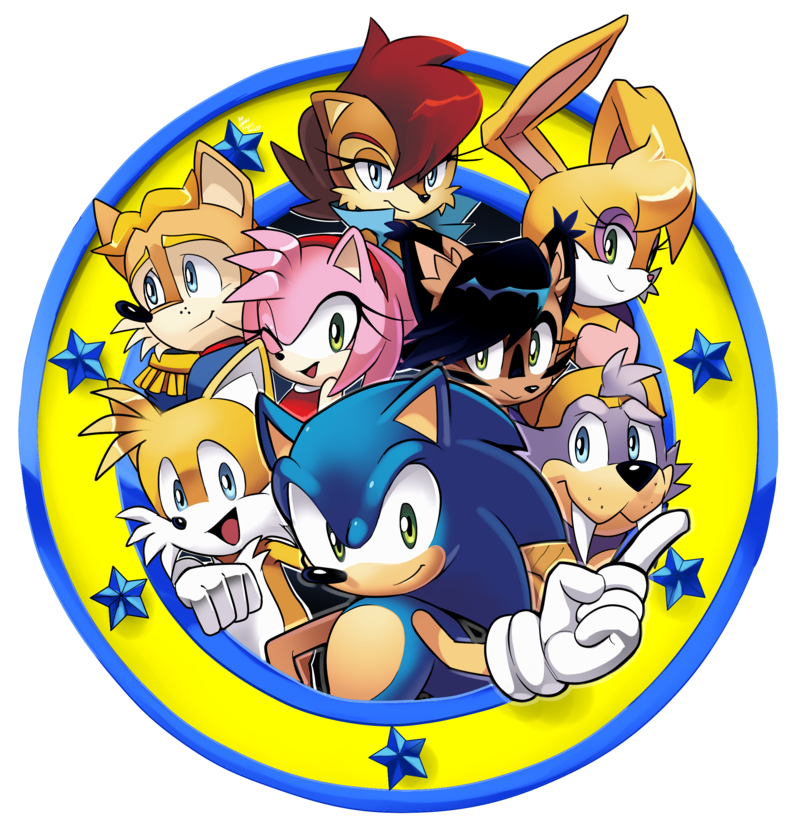 A history of Sega of America's last standing hedgehog footprint

It all started off with a four-part miniseries dated November of 1992 to February of 1993. After success it finally entered continuous production with issue 1 on July 1993. While the comic was expected to last only to issue 50, its continued success spurred Sega of America to pressure Archie Comics into pushing the series beyond that point, saving a character the writers planned on killing off at the time.  As of December of 2016, the comic has reached an unprecedented (for licensed books, anyway) 290 issues.  Inspiration for this series has its origins in the old cartoon that aired on ABC in the United States and CTV in Canada, with elements from the syndicated "Adventures of Sonic the Hedgehog" thrown into the mix early on, incorporating the same scenes, stories, characters, and overall lore into itself.  Overtime, this became a spiritual successor to the saturday morning animated series, referred to by fans as "SatAM", after it was cancelled on television on a cliffhanger ending second season, many saw it as fulfilling the need for its lost 'third season'.

Aside from the occasional video game adaptation and the major Sonic Adventure crossover/adaptation in late 1999, the stories have remained consistent, building upon the lore started in SatAM of a ragtag band of teenage woodland creatures joining together into a resistance movement called the "Freedom Fighters" to overthrow the despotic dictator, Doctor Robotnik, who ruled most of their world with an iron fist.  Upon his defeat, they would travel their world, battling any would-be villains or megalomaniacs where-ever they were, to protect their forest homeland.  It was during this time that the comic had a very steady cast of writers, mostly of Ken Penders and Karl Bollers, with others occasionally contributing to the stories.With Sonic Adventure's crossover in 1999, the comic saw major changes, such as the inclusion of human characters and locations (Station Square from Sonic Adventure being one example), but it stayed true to its classic form.

Conflict from across the pond resulted from issue 134; the comic publisher did court legal controversy by its artist at the time (Johnathan Gray) including Techno the Canary from the British "Sonic the Comic" (defunct by then, but published by Fleetway) as members in a crowd in a concert, even being referred to by name, though without permission of their creator/rights owner, Lew Stringer.  Techno would re-appear for Issue 138, again as a tribute or in-joke in another crowded scene, but would not be seen again in the series.

In 2008, video game developer BioWare developed and released Sonic Chronicles: The Dark Brotherhood for the Nintendo DS.  This was their first portable console game, as the developer was used to longer development cycles for console releases, and since most of the employees at the small Canadian developer were big fans of Sonic the Hedgehog, they reached out to SEGA to see if they could gain permission to develop a Sonic the Hedgehog game for the Nintendo DS.  Approval was granted and the game was released by 2008 (2009 in Japan).  The way this video game ties in with the comics is that it used some characters and plot ideas from other media in the Sonic franchise: the SWAT Bots from SatAM Sonic, the concept of a race of tehnological and militaristic echidnas being sealed-away in a prison dimension, and a female echidna that switches allegiances from them to Sonic and friends in the game all had inspirations from the American comics. In 2009, this game came to Penders' attention, but this was not seen as much of a problem until Archie published a crossover story featuring the Sonic Chronicles characters in Issue 191 (as a video game tie-in, as part of their license with SEGA, to promote the games, sometimes nicknamed the "SEGA Mandate").  It was at this point that Penders was let go from Archie Comics Publications for unstated reasons.

In 2009, Penders had begun copyrighting characters and stories that he wrote and contributed to the series, which were certified by April of 2010.  Penders would file a lawsuit against SEGA and Electronic Arts (who had purchased BioWare shortly after release of Sonic Chronicles) for copyright infringement. They claimed that their "Nocturnus Clan" (the echidna race in the game) was a rip-off of his "Dark Legion" (which was introduced into the comics back in 1997), and their female protagonist Shade the Echidna was a plagiarism of his female character Julie-Su (also introduced in 1997).  The case was filed in New York District Court, and things were progressing until Penders was told he would have to file a lawsuit against his former employer, Archie Comics Publications, regarding the questionable ownership of his contributions.  However, before Penders could do so, Archie Comics had tried to file a lawsuit against him (seeking a total of $USD 250,000 plus legal fees) to claim they owned everything since the employees of the company signed work-for-hire contracts, though they would ultimately be unable to prove their claims or even find those contracts.  As a result,  Penders was found to ultimately be the owner of his contributions (as Archie Comics could not reasonably prove he signed a work-for-hire contract).  Archie Comics was then under tremendous pressure from SEGA of America to settle the lawsuit as quickly and cheaply as possible, which meant Penders' characters, locations, and previous storylines had to be written out (since they cannot be used without permission).  It was during this time of legal settlements and regular contract negotiations with SEGA that Archie lost their exclusivity agreement, meaning SEGA could shop around to other publishers to print Sonic the Hedgehog-themed comics if they so desired.  This delay in negotiations also tightened the "SEGA Mandate", requiring Archie Comics to stay MUCH closer to the video games in terms of stories, and also caused fears among fans that the comic was cancelled back in the winter of 2015, due to the comic book issues coming out a few weeks late.

Another year, another close call

Which brings us to today.  On Friday, January 13th, 2017 (perhaps a darkly fitting date), an astute fan noticed that subscrptions for Sonic the Hedgehog in both the Archie Comics iOS/Android app and their online webstore had been removed, and that all comics (including backstocks of Sonic the Hedgehog) were listed as up to 75% off.

Even more concerning was that Archie Comics had dropped the 2017 issue of Sonic Free Comic Book Day (after its cover had been revealed), replacing it with a promotional issue of Riverdale to boost popularity of their new television show on The CW Network.

Further investigations revealed that on December 28, 2016, Archie Comics received a cease-and-desist order from SEGA of Japan to stop printing any and all comics, likely due to their long-standing contract with SEGA of America not being renewed.  Since Issue 290 and Sonic Universe Issue 94 were printed and already shipped to retailers, Archie said they would comply by ceasing for the next issue (by delaying 291 and Sonic Universe Issue 95) while things were sorted out.  In the meanwhile, their subscriptions were removed and a fire sale of back-stock (of both Sonic the Hedgehog comics and Archie's own offerings) was announced, to clear out any excess inventory of issues.  When asked by fans through email and their comic subscriptions phone line, the staff at Archie Comics were unable to confirm or deny if the comic had indeed been cancelled. The subscribers pining to know if they were just delayed again due to contract negotiations, or if things really fell through this time.

The answer came On January 23rd, Archie Comics had published its April 2017 Solicitations for upcoming comic books.  Among the upcoming issues were Sonic the Hedgehog issue #291 and Sonic Universe #95, both of which delayed from February to April.  So, it appears that the comic has just been delayed by a couple months again, most likely by contract and license negotiations with SEGA (unlike last year's four-month delay which was caused by Archie Comics' printing press failing and needing repairs). The swift hedgehog had dodged another bullet, and will continue to push the boundaries of longest running video game comic for a few years more.

Update 1 (Jan 28, 2017): There was only the one mini-series before the regular series.  Article has been updated to reflect this fact.  Minor spelling and grammar errors were also corrected.

Update 2 (Jan 30, 2017): Sonic fan website SoahCity.com has reported that all Archie Comics have been delayed until April 2017.  We will update this article if any further developments occur.

Update 3 (Jul 20, 2017): There's been a development regarding the comics. Click here for the updated story.

The article's been corrected with that information. I'll take this as a lesson to not use English Wikipedia as a reliable source (or at the very least, its article on the comic series was written very poorly and confusingly). :)

Thank you kindly for the information, Anonymous Visitor.

In the spirit of transparency and lack of bias, I should clarify that I've been a fan of the comic since I was a lad, following it since around issue 8, and that I do hope the series continues for many more years to come. When I first read about the rumors of cancellation on The Sonic Stadium's online board, I was shocked, as if it were the end of an era... a large part of my sci-fi life would be coming to an end. Thankfully, my fears were incorrect!

I could have gotten into the comics, but the unchanged monoeye that Sonic still has (and a couple of other critters) really puts me off.

Hmm... there's been an update of sorts from this Tumblr post:
http://theamazingsallyhogan.tumblr.com/post/157126289491/sonic-the-hedgehog-scot...

The cliffnotes version is below:
here's the cliffnotes version: Scott Fulop (former editor, 1992-1996) transferred his rights to "Narrative Ark Limited Liability Company", a company he owns, so he can sue Archie Comics Publications and SEGA and not be held responsible if he loses (his LLC can simply file for bankrupcy instead of him facing a financial catastrophe)... it's legal and in fact a wise decision.

Though from the facts stated in that Tumblr post, Fulop's claims are on far shakier and uncertain ground than Ken Penders' claims were... i'd put his odds of triumphing in court against Archie on any of the six or so counts at 20% (and maybe 5% of him coming out on top on all counts).