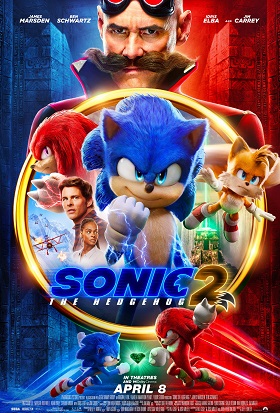 Sonic the Hedgehog 2 is that thing which, as a furry reviewer, I feel like I should run into more, but actually don’t. It is a perfectly acceptable kid’s movie. Which is a bit of a problem, because that makes it the worst type of movie to review. A movie that’s just okay. It’s fine. Alright, even.

I’m tempted to write more about how the Sonic the Hedgehog movies bookend the Covid-19 pandemic, which is just a coincidence, than this movie. I'll keep it short, but I want to make clear I’m a guy who reviews kid’s movies for adults, not a virologist, so while I may feel safe enough to go back to theaters, you do what you feel comfortable with.

It’s okay enough, and the Sonic franchise has a passionate enough fanbase, if you want to spend full price for a movie ticket, I won’t judge too much. But it’s not so good I don’t still recommend waiting until it hits streaming.

Sonic the Hedgehog 2 is directed by Jeff Fowler, and features a returning Ben Schwartz as the titular character. The two new furry characters are split between a celebrity guest spot for Knuckles the Echidna voiced by Idris Elba, while Miles "Tails” Prower the two-tailed fox is voiced by Colleen O’Shaughnessy, who has been voicing the character since 2014’s Sonic Boom.

These two characters were definitely the best sale for me. I like Idris Elba as an actor, and, well, I like foxes, so adding those two characters to the mix was welcome. Elba does do a lot of voice work and seems actually enjoy this kind of acting, so if you’re going to give the role to a non-voice actor, Elba is a good choice. I’m not sure he’s entirely necessary, but once again, he seems to be having fun with the part, at least. And keeping with a traditional voice actor for Tails instead of going for another celebrity feels like the right decision.

The live action characters are a bit less satisfying, with James Marsden and Tika Sumpter as basically Sonic’s adopted Earth parents. Sonic’s age is a bit iffy to still need parents, so they seem a bit superfluous. And, to make things worse, they get into a bizarre, not super funny subplot involving a wedding. Jim Carrey returns as the villain Dr. Robotnik, but while his performance has been touted as a return to his chaotic heyday, I was around for his heyday, and most of his routine was at least PG-13, so the PG rating is reigning him in just a bit. Also, honestly, heyday Carrey was overrated.

The action sequences are exciting enough, though, once again, due mostly to the rating, stakes never seem that high. Tails does get knocked unconscious at one point, and my reaction was mostly just wake him back up, nobody is actually going to get hurt in this movie. The jokes are pretty lacking, too. I didn’t laugh much. They weren’t too annoying, but they didn’t land often, either.

Guess that’s my final call. It wasn’t too annoying.

Between this review and the one for Sing 2, and maybe a few before this, I'm starting to see a pattern.

I hope you are doing okay. I mean, I don't want to read too much into these things, it may be coincidence, but there is a pattern of "Meh" to these latest reviews. Meh is fine if that's what the movie is, but I worry this is more a perhaps mid-life crisis or some onset depression over "having" to review furry movies and you're going through the motions.

I know for the 1st Sonic film I had checked with you if you were going to review it, because after having it recommended to me by someone I wanted to give it a shot, to which you said that was fine because you had no interest in Sonic things.

I guess what I'm saying is, there is no shame in not doing something if you don't want to do it, or to take a break from it if needed. I've been having to do that with my YouTube channel more often than not these days when it comes to news videos because I do still feel like a duck out of water doing it.

I would note that if Tails did get injured in a fight in the film, then I'm glad he's doing something, unlike in forces when he just sat back and watched Sonic get his arse handed to him. True Dat.

To be fair though, furry films haven't been doing as good as furry games have been since 2021. Just found another good one that was released in 2021 that was not even nominated.

Yeah, I think the 500 word count experiment was a bust, if it results in "dude, are you okay?" comments. 1000 seems about right.

My word counts tend to balloon up, and I'm not Pauline Kael over here, and this ain't Bonnie and Clyde, so I thought a wham, bam, thank you ma'am approach was appropriate.

2 star reviews like this and Sing 2 are hard; I watched this two days ago and it's already faded quite a bit. If you sense a lack of passion for those movies, positive or negative, it's a more a reflection of their inability to stir up any emotions than a lack of emotions on my part.

I'm "meh" on these movies because they're "meh" movies, and I have too much respect in my audience and myself to pull some "angry reviewer" schtick.

I think it's more that things like Zootopia and, say, Wolfwalkers going back to the traditional "kids movie" level of content is 'meh'. At the same time, they are clearly movies with furry characters (a fox, even), so they demand reviewing.

The movie was indeed meh.

Pointed Fox's take on Tails is my favorite. He's technically repping my hometown!

I can't help but think that white gloves and aeroplane maintenance don't really mix (though there are contrary opinions, at least with regards to engineering in general).