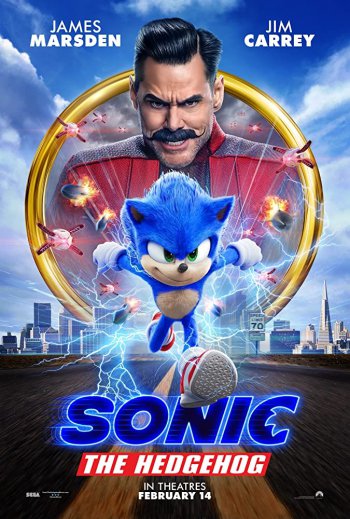 This movie would have been a mediocre view had I gone to the theater to watch it among the populous. Instead it became quite a powerful opening to the story as I watched my purchased digital copy alone in my home early April 2020, during a time where isolation wasn’t really a choice, but a mandate.

Because that is the very situation Sonic finds himself in: mandated isolation. As the hero finds himself forced through an inter-dimensional gateway to Earth by his owl guardian as he is hunted down for his power. And this connection between the hero’s situation and my own didn’t really hit me until the ball game scene, where seeing kids play baseball and the crowd gathered around to view them made me think off hand ‘those were the days’.

This transitions wisely to Sonic playing the game on his own, playing all the various roles simultaneously late at night with clever use of camera placement to keep one of him on the screen at a time. After successfully hitting an infield home run and celebrating it his accomplishment to his ‘team’, a silence fills the air.

As noted, the emotion of this scene would have probably been negligible had I watched it before the current situation of our world. However, it was at that moment that I was reminded of my own forced solitude and as a result this scene hit me like a spin dash to a badnik. It was such a powerful moment I couldn’t help but view the whole of the movie through the lense of that theme in general.

Worry not, the toilet paper joke is actually not toilet humor but the result of utilizing it during a fun bar fight scene. That stuff really is undervalued.

Isolation as a theme

Back on putting the self in reflection. This is the thing that Robotnik and Sonic have in common, and that thread actually makes them stronger characters in the film: isolation. The causes and effects of that isolation is what separate the protagonist and antagonist.

Sonic was forced into solitude because of his own actions at a young age, but really never wished to be alone. Robotnik, on the other hand, voluntarily entered into it after the actions of his peers invoked a misanthropy to his own kind and life in general. Though we are not entirely certain if Robotnik’s peers were jerks to him prior to him being a jerk, what we can assess is that he came to a decision early on in his childhood to rely only on himself. Instead of going to those in authority to handle those that bullied him, he took matters into his own hands. We learn this in a phone conversation between him and Sonic’s cop friend.

Those in the furry fandom typically have backstories that include solitude in one form or another. And we can see how that can have a heavy influence on those growing up and how it bleeds into our adult lives. Do we behave like Sonic, wishing to be involved, but hiding in the background for fear of how the world would see them? Or do we behave like Robotnik and rely only on ourselves and resent when we need to work with others? How does one utilize their isolation? To try and make the world better for other creatures (like a turtle needing a lift), or to just better oneself at the expense of others so that they can feel like the most powerful and important person in the room?

Clearly the ending comes with a warning for those who are corrupted by their voluntary solitude that they could take actions that would lead them to have society turn on them and force them from a voluntary solitude into a more involuntary one. As Sonic makes connections with others, Robotnik ends the film with the affliction that our protagonist started with.

Or perhaps maybe I’m thinking too much on it and isolation of both the voluntary and more recent involuntary kind may be my area of expertise that I am projecting onto my interpretation of the film.

Plotholes - If you think too hard

The following section is brought to you by the please, please, please get a life foundation. I felt there was one major plot hole in the film, which if you ignore will increase your enjoyment of the file. Just have to beat the CinemaSins guys to it.

On the road trip, following a scene where the cop tries to tell Sonic to go away unsuccessfully, they stop at a bar. The cop tells Sonic to stay in the car while he goes to make a phone call. Sonic sees the bikers and shenanigans of the bar nearby and is lured in. When the cop returns to an empty car, instead of ditching the blue blur (that he tried to do earlier), he goes after him with no real motive to do so.

Given this, the scene afterwards where they are on the road again and Sonic gets angry at being told his friend wanted to leave Green Hills makes little to no sense. Especially when he chides him before trying to fend off an attack from Robotnik: “If I don’t come back, ditch me, you’re good at that.”

Dude! He went into the bar to retrieve you! He could have ditched you back there and he didn’t! With that perspective it just made the conflict between the road pals feel extremely forced.

A smaller hole came early on in the film the officer protagonist finds a blue quill by the side of the road, yet remains skeptical of the legends around a blue creature in the woods until he meets Sonic in person. Which is strange.

That and how does Sonic know about Uber's "star rating" system (via a joke about his own driving) if a little earlier he believed 100 people in a town is a heavily populated area and thus would have to be ignorant of the transportation logistics of more densely populated areas that would utilize ride sharing applications?

And the cop tells Sonic that San Francisco is a "straight shot" west of their position on the road, yet in the scene that shows the cop marking up his map for the trip he is coming in from the north through Oregon. Though that may explain why Sonic hit the Pacific Ocean when going straight West. Though in that case I'm surprised Sonic didn't confuse Seattle for his destination, since that is the city straight West from Montana. Though Sonic can read I suppose... but then if he can read he could just follow the road signs.

Oh, and during the en medias res opening, Sonic runs clear up the side of a city building to evade Robotnik. Yet at the end of the road trip he can't access the roof of the building his rings fell onto because the door to the roof is locked. He can run up the side of buildings as the opening showed so why did he not think of that before asking his human friends for help accessing the door?

And why would you be more disappointed from receiving a $50 dollar Olive Garden gift card then getting a letter from the President? I certainly would prefer the former. It makes no sense.

Okay, I'll stop now before a Warner hits me with a mallet.

A Cinematic Universe all its own

At the end, in the middle of the credit roll, we see an appearance of Tails through a portal as he seems to be searching for Sonic. Was he sent by someone from Sonic’s home world to retrieve him? We don’t know, it’s a teaser at the end of the film which usually gives a lead to the plot of a sequel.

I can say that I am quite curious as to where they take this story, and since the first movie did well for its opening weekend, my hope is that our “situation” did not hinder the numbers and that more had bought the film for direct download. I would like to see where they take this story. Who sent Tails to search for Sonic? Now that the movie may secure more budget for a coming sequel, and with the fact that we live in a world where our human actors are going to have to socially isolate, would the next film be more heavy with going back to Sonic’s home world as a setting?

As someone who has experienced many different forms of Sonic media in my lifetime, I have seen far worse portrayals and stories around the blue blur than this one. I think its story around Sonic arriving on Earth was handled better than the first season of Sonic X had. Particularly with the subtle impacts his mysterious and hidden presence has on the townsfolk of Green Hills.

The nicknames that the characters had for one another prior to direct interaction was especially a nice touch. The town called Sonic the “Blue Devil”, a play on the “Jersey Devil” and other such mysterious creature mythos. In return, Sonic called the cop when watching him from a distance “Doughnut Lord” because of him talking to the pastries when by himself while on speed trap duty (did I mention the isolation theme?). This pseudonym throwing that the main characters do on a regular basis makes the transition of Sonic calling Robotnik “EggMan” as an insult in the final confrontation scene seamless.

If the sequel does come out, I will definitely be giving it a view. This movie had a simple premise but it did what it needed to do with the characters to place a solid foundation to do more with them in the next go around than a simple road trip.

You know, just because I have a review about isolation is not an invitation to try and sell me a date... I'm not THAT lonely to use your horrid site, spammers...

No? You will REGRET it. They said so; it must be true!