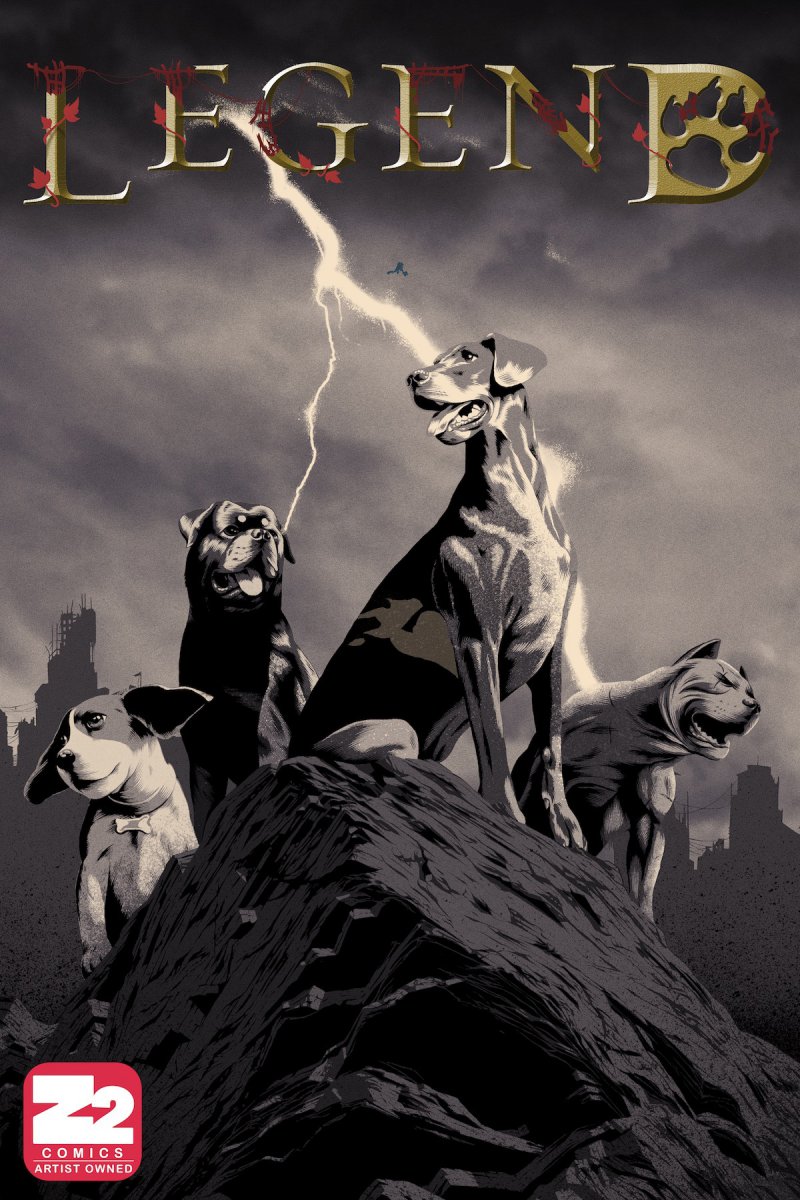 Legend is a graphic novel by Samuel Sattin and Chris Koehler. It combines the popular post-apocalyptic story setting with talking animals - giving it furry appeal - and wonders how domesticated animals would survive after humanity is wiped out in a biological attack. To be fair, not all the humans are dead, but the only ones that we encounter have been turned into flesh-hungry zombies.

The first volume of Legend begins after humanity has already fallen. We meet a pack of dogs living in The Grounds, an open patch of a land next to a city. They need to choose a new leader as their previous one has just been killed by a mysterious creature in the ruins of the city. Vowing revenge, the new leader of the pack, Legend, begins a journey which leads him to ally with a clowder of cats and traverse a dangerous world which is undergoing dramatic changes.

Much of the comic is dedicated to setting up the world, introducing us to its cast of characters, the land they inhabit, and the back stories that underlie their motivations and mythology. This is all done well. Volume 1 contains the first five chapters of Legend and at the beginning of each chapter is a map. Chapter-by-chapter more of the “fog of war” gradually disappears as we learn the surrounding geography. The flashbacks, too, are entertaining and each one is visually distinct; based on the emotions of the character. It is only in one happy flashback that we ever see the world brightly lit and in full colour.

Throughout the entire comic, the artwork is excellent and does a good job of conveying the tone of the story. The majority of the scenes are highlighted in specific colours to convey mood and were a deliberate choice by the artist to limit his palette to better reflect the dogs’ limited colour range. However, the dark tone that falls over most of the story also makes it challenging at times to make out what is happening.

It can also be difficult to follow the text on certain pages where the flow of the dialogue bubbles are not entirely clear. This mostly happens there are multiple characters speaking, where it can also be tricky to know who is saying what. Aside from that, the use of language is sometimes very smart. When we flash back to living with humans, the human dialogue is indecipherable except for a few key words. This, again, gives us the canine perspective but it also raises an issue shared by many similar works; how can all the different animals can understand one another except for the humans?

It’s interesting to see some of the comparisons that were made between Legend and other art. One comparison that appears on the front cover, is quoted inside and which the authors list as an influence is Watership Down. Aside from having animal characters, I do not really see the similarity. The same applies to comparisons with The Incredible Journey. Perhaps it depends on one’s exposure to similar works but I find it would be much better to describe it in comparison to Ginga Densetsu Weed which also contains a dog pack, a general lack of humans and a lot more examples of animal diplomacy and combat than Watership Down has. With the city setting, it reminds me of The Outlaw Varjak Paw. Although that one had a cat as the main character, we still had packs living in a city and there was a general unease between dogs and cats.

In other places the influences are quite obvious. The authors have mentioned the influence of The Secret of Nimh and one of main meetings in Legend's first volume is that with a hawk who knows something no one else does. The parallel to Mrs Brisby meeting with the owl is very obvious. Sometimes there seem to be parallels but which are probably just coincidence. The tensions between whether humans are good or bad, played out between two dogs’ back stories, one having been used for dog fights and the other loved pet, is the same conflict that we see in the Hungarian film White God.

In the end though, the allusions and comparisons do not matter. The pertinent question is whether Legend is any good or not. I will not deny that the artwork is beautiful and the world is intriguing but volume 1 only sets up a story and leaves the reader with many questions. If the story is going to continue and we will delve deeper into the mysterious shadow creature and resolve the cliffhanger this first entry ends on, then it will definitely be worth buying. Unfortunately, I was unable to find any information on when, or if, volume 2 would be released.

When did "speech balloons" become "dialogue bubbles"? Or is that American vs. British?

Nah, just me not being super familiar with comics. :p

Actually I always knew them as speech bubbles but I had the term dialogue in my head and so... dialogue bubbles were born. :) According to Wikipedia my new version isn't a current variant for some reason.
"Speech balloons (also speech bubbles, dialogue balloons or word balloons)..."