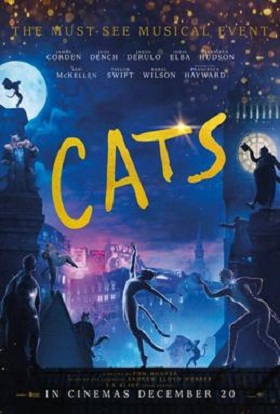 Cats is such a bizarre phenomenon, I don't really know where to even start.

It's not just the movie. That a stage play based on a series of children's nonsense poems would not only be made, period, but that it would go on to be one of the most popular plays in some of the biggest venues is one of those things that make people say things like "well, it was the 80s" and "cocaine is a hell of a drug". Heck, there isn't even a lot of anecdotal evidence that drugs were involved any more than usual, if at all.

But, of all the inexplicable things, I'd like to point out the original tagline of the movie, which is so generic for such a weird property, stood out to me. "You Will Believe".

I will believe what, exactly? Neither the poems, play nor, it turns out, this feature length film has much in the way of thematic content, other than maybe "cats". Certainly, questions of faith or belief are not addressed. You could say the "jellicle cats" are a sort of feline cult to the moon, but there is no interest in the philosophy or theology of this possible cult. Certainly, I didn't come away believing there is some "Heaviside Layer" that would grant cats an extra life if they sing a song really good. Furthermore, I don't think the movie was trying very hard to make me a "believer".

So let's actually talk about the movie. The very first shots are set at a human level, as a canvas bag with a cat inside that we will learn is named Victoria (Francesca Hayward) is thrown out the window of a moving vehicle, apparently abandoned by her human owners, who we never see. This departure from the stage play, where we are given a point of view character who is new to the world of movie to have stuff explained to, is a welcome addition.

It's also the only thing the opening scene gets right.

Since we are at human level, we see cats at cat size, except they're not cats, they're people covered in CGI fur and kitty ears, and therefore look exactly like evil little goblins. This impression is not helped by keeping the heavy synth score of the stage play. In the 80s, synths were cool. Nowadays, synths mean "throwback to 80s horror movies". We've seen the trailers; we knew these bizarre cat people were out there. But it's still jarring.

Let's talk about that for a minute. In case you're not actually a furry, and through some bizarre combination of keywords in Google's search bar you ended up here, I would like to make it perfectly clear that if an actual furry were making this movie, they would not do it this way. If the costumes in the stage play are a bit weird, well, at least they're clearly costumes. If the movie just emulated those costumes, that'd be fine. It'd be unimaginative, but whatever, it'd better then this. If a furry would have done this movie, the cats would probably be bipedal, but they'd clearly have cat features. That's the thing that makes these characters so stupid looking. They're just people with CGI fur.

At no point do you think "oh, that's definitely a cat." No, you think "those are people". And also "those are naked people". It's slightly off-putting, and it serves no purpose. What's the point of having realistic fur if at no point am I in any danger of wondering if that's a real cat on the screen? Just put them in a costume. At least then I know they're wearing pants, and I'm not wondering if Rum Tum's Tugger is going to spill out. I mean, I visit sites like e621 frequently, but there were children present at my screening.

On with the show

Well, anyway, after the jarring opening, things get a bit better as the cameras settle on a cat's eye level, which sounds like it would just turn the little goblins into bigger goblins, but it actually does help. Victoria has the basic plot explained to her. Tonight is the Jellicle Ball, where various cats basically have a talent show to be judged by Old Deuteronomy (Judi Dench). The winner will receive a trip to the Heaviside Layer, which grants them a new life. This is better, but the movie is determined to use it's first half to drive off all but the most dedicated, as the first two contestants we meet are played by Rebel Wilson and James Corden, i.e. the two actors in this thing most likely to cause a negative reaction from a portion of the audience just by their presence. We also meet Rum Tum Tugger (Jason Derulo) and the duo of Mungojerrie (Danny Collins) and Rumpleteazer (Naoimh Morgan), who sing songs for Victoria, despite the fact that they're not actually contestants, but whatever, they had poems that became songs in the play.

Also of note, Rebel Wilson's character, Jennyanydots, trains mice and, uh, sexy cockroach ladies as her talent. Even worse is that the scaling once again leaves me perplexed as the roaches and mice are the same sizes. Only the strong survive watching the first act of Cats.

We're also introduced to our villain, Macavity (Idris Elba), who was always my favorite jellicle cat, and still is. Despite assurances that he's a master of feline crime worthy of comparison to Sherlock Holme's nemesis, Moriarty, his grand plan is to kidnap all the other contestants so that Old Deuteronomy has to declare him the winner by default, which will eventually be foiled by Old Deuteronomy more or less informing him "Uh, that's not how this works, dude." But Idris Elba actually seems to be having a lot of fun, and his song is pretty good, so he's still the best.

Okay, so Victoria and company finally arrive at the site of the Jellicle Ball, and finally the strong are rewarded, because the opening ceremonies, an extended dance sequence, is great. Here, the movie just drops the pretension that the movie is about cats and just lets you luxuriate in a bunch of trained dancers (who are technically naked) strutting their stuff in front of the camera. I've actually written before about director Tom Hooper's ability to make movie singing and dancing feel live without feeling stage-y. Guy might be an Oscar-chasing hack, but he's not talentless (I actually like The King's Speech, thank you very much). However, I'd be remiss to not point out that you can have great dance sequences with animated cats, too.

From here on out, the movie is much better. You get Ian McKellan as Gus the Theater Cat, a great tap dancing sequence featuring Skimbleshanks (Steven McRae), Macavity finally gets his song, and of course, you get Grizabella (Jennifer Hudson) bringing down the house with "Memory". Though "Memory" is not the easiest song to sing, I had no doubt Hudson could nail it. In an interesting choice, she doesn't, but instead sings it as the emotional appeal of a broken down character begging for one last chance it is.

There's a bit more clumsiness with Macavity's reaction to Old Deuteronomy's rejection. He magically disappears her, and wouldn't you know it, the next contestant is Mr. Mistoffeles (Laurie Davidson), the magic cat who's special talent is making things appear! I won't spoil what happens next for you.

All in all, Cats isn't a bad movie. It's not, by any means, a good movie, either. It's a stupid movie. However, it's based on a book of children's nonsense poems. The whole purpose is to be stupid, but fun. And I can't say it doesn't succeed at that goal.

So, I watched this movie, cringed at the many cringey bits, enjoyed the enjoyable bits, didn't believe a bit of any of it. So much for making me a believer.

Then I went home and hugged my cat.

I'm not a normie who yells art design like this alone is bad since thinking so would be stupid since 'beauty' is subjective, and knowing so, I cannot really argue that even these designs are really "bad" unless it was aimed at the general audience (which obviously isn't very happy for the designs). Otherwise I would be arguing "Art is objective!" which is usually ill saying.

Speaking from the personal perspective though, these CATS characters are so bad, that it might effect my sexual development that I thought was already over causing me to prefer furry characters that look far away from human anatomy as much as possible. I mean, I'm already far away with a little mixture of shapes that are neither human or earth animal, but this could make me move even further away from human that I might start to worry a bit.

Are these CATS people more ugly than humans? My answer is usually "No." for beings that don't look personally nice. But this is so bizarre that this attempt of humanizing cats (if that is still really the case) is an example in on itself is like an offense that is additional. So it's like a "No, but maybe yes." type of thing.

Jesus Christ, this comment might be the meanest thing anyone's ever said about Cats, and may I remind you, everyone and their dog has been mean to Cats.

https://multiversefeeling.blogspot.com/2020/ LOL, you're celebrating TheDarkReindeer leaving YouTube? Nice to know that he's still living rent free in your head, he'll be back and i'm going to reupload his videos owning you

Just to make things more interesting. There's a different film entitled "Cats" hitting theaters this weekend. This one is from China and was originally released there in 2018 under the title "Cats and Peachtopia". Evidently whoever decided to shorten the title to simply "Cats" for the western release was either unaware or chose to ignore that there was another "Cats" coming out around the same time (and even if they didn't, the simple fact of how widely known Andrew Lloyd Weber's "Cats" is should be reason enough not to use the title for unrelated works).

It sounds like they're trying for a "mockbuster" approach, but that usually works better when the movie you're trying to confuse yourself with is, you know, a blockbuster. And not a notorious flop.

Wolf Walkers is available to stream in America (finally!), so, actually don't wait for the full review, just go now. But, uh, I just finished it and it's, well, it's better than Cats.

I haven't seen either film but I saw both trailers and Wolf Walkers was clearly going to be a superior film. In probably every way.