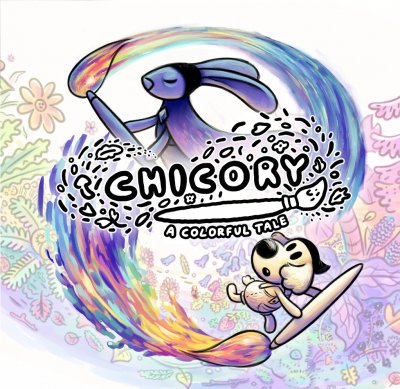 While 2021 was a pretty crappy year overall, for anthro gaming titles it was certainly a renaissance. It also did an excellent job curb stomping my 2018 statements that visual novels seem to be the genre of choice for anthro game developers. In 2021 we had a Metroid-vania mixed with a brawler in Ursa Nominated FIST. We had an isometric top-down combat adventure in Ursa Nominated Death’s Door. Now we have a game that is a narrative and art focused 2D grid exploration and creativity game in Chircoy: A Colorful Tale. Unfortunately this one didn’t get a nomination, because I would not have complained if it did.

This game is interestingly one I would recommend to furries who are artists more than gamers. While it doesn’t require being an artist by any means, and traditional gamers would be able to complete the story just fine, the narrative has more reflection on the power of being a creative type and the stress of societal expectations that comes with artistic pursuits. Imposter syndrome, having people demand things from you for exposure, and other such tropes in the artist world are addressed through your character’s trials.

There is a full world to explore and color to your heart’s content and it's more about the journey than the conflict. But there is no art without some struggle. While your character named after your favorite dish may have started their adventure wanting to wield the magic brush of this world, heavy is the hand who wields.

To avoid spoilers stop reading at Art within the Art

A different kind of Experience - In a traditional format

Unlike the other two titles I reviewed, this game is very much not challenging in a traditional sense. You can even skip the boss fights if you wish to, because the game is not one that is focused on direct conflict. It is instead a narrative and exploration focused game that discusses the more internal trials and tribulations of an artist. You start as the janitor in the wielder tower, and find yourself given possession of the mystical brush that you can use to color in the world.

However, there is something wrong. The previous wielder has shut herself off and all the previous color in the world is gone. And upon further exploration, strange and haunting trees have started to sprout up, giving cold and ghastly whispers as you approach.

You explore this land of Picnic in a hero adventure style world, like classic top-down Zeldas. The Link’s Awakening inspiration was something that was discussed by the developer and that can be found with the phone booths you can use to help on what to do next. Ironically, the way speedrunners have done sequence breaks through transition boundaries is also similar to the Gameboy title, though I don’t think that was intended by the developers. I did enjoy that feeling of exploration though, as I thought to myself that this is what the classic gameboy Zelda title would have been if the whole of Koholint Island was based on its short lived Animal Village.

And also similar to the Zelda franchise, Chicory is a lady of great power and not your playable character’s name. She is the bunny Wielder who passes the brush and its burden off to you.

The challenge in the game comes from its environmental puzzles. You’ll need to solve movement riddles and utilize your paint brush in unique situations to progress. If you wish to apply yourself further, you will unlock clothing items to help design your character’s motif by performing more intricate wielding acts.

This is an emotional journey where you will connect to many interesting animals. The interactions between your character and Chicory are harrowing and memorable. The other characters in the game also have their own personality and charm. Some of them you will find traveling the world and critiquing your work. When they do this, it makes the world feel like a place where these characters live rather than just isolated towns with cardboard non playable characters.

In that turn, one of the most interesting characters is the land itself. At the start of your game your brush is limited to four colors, however what the four colors are depends on the location. This gives each region a sort of color culture. In turn, that means the animals mentioned above that travel around can be colored in with a variety of shades based on their journeys, whereas the more homebody animals will have a more restricted palette based on where they hang their hat.

There have been reviewers who complained about the limited color options out the gate, however in the world of art, food, or engineering, the truth is less is always more. The restricted palette allows you to work with the limitations to give each region its own personality as you see fit within the restrictions. And then when you do get access later on in the game to create a custom palette, it seems a bit much to go back and redo the colors. It felt to me that in doing so would take away from the area's sense of biome identity if I started using colors from an outside palette.

Though you could if you really wanted to— heretic.

Art within the Art

This section discusses some dynamics in the game that bring up story elements. So I would stop here if you wish to avoid any spoilers.

The land itself can have character arcs, especially the main town of Luncheon. As the game progresses, the simple song of the town starts to change in tone. It's these subtle tweaks to the established foundation that leaves the town of Luncheon as one of the best executions of a corrupting landscape I’ve seen in a video game to date.

They actually do this quite simply and eloquently by breaking the songs into different concurrent pieces which can play interchangeably. As the environment changes they inject a different accompaniment that causes a dynamic music score.

The music is good on its own, and makes for a decent original soundtrack, but it's those nuances of the shifting instrumentation and environmental variance that are lost when listening to the tracks outside the game.

Another way the land evolves over the course of gameplay is that as you unlock additional brush skills, the means of travel you have to move along the land also shifts and changes. One of interest is where you can swim up walls that are painted. However, your ability to traverse up the cliff is based on the type of line shading used on the wall as well. If it is diagonal line shaded you can go up, however if it is cross hatched instead you cannot. You can also later swim in painted water. As your movement abilities improve you start to see the world in new ways.

The swimming in paint skill was inspired by Splatoon, as noted by the developer.

After finishing my journey, the game surprised me with something cool. It showed my map as I explored and colored it in via a GIF format. These can be saved and shared, as you can see here. As someone who was streaming the game, I would advance in the story and world doing the bare minimum interaction with painting in order to expedite my journey without too much down time in coloring. Later when I was not recording, I went back and painted in all the areas I had visited. Watching the GIF you can see when I was streaming and when I was coloring.

Each journey will in turn also have a different method of coloration and exploration. This in turn shows your thoroughness as an artist and as a gamer. The path you walk, and the colors you lay down both strokes on a unique tapestry that is your playthrough.

In the end, thus is the journey we all go through, each unique in its own way. How we choose to fill in the lines we find ourselves in is up to us.

Or perhaps I’ve been exposed to too many generic platitudes of critique from the creatures of Picnic and it now got stuck in my conclusion. But if you are a creative type you’ll enjoy this game to its fullest. And even if you are not, you may get to see the world in a different way for those who are creative in this fandom. Filling the world with color is not as easy as it seems.

I think it was ultimately just a case “too much” coming out that year, with Deltarine Chapter 2 coming up in a surprise reveal, Doodle Champion Island Games also showing up and being considered by many to be Google’s most impressive game, and the most recent Ratchet & Clank getting in because it introduced a new playable female character. Obvious certain people couldn’t resist that. ;)